The three-part diagram in Figure 26-7 illustrates how an increase in the money supply would lead to an increase ·in aggregate .demand. we can now show the effect on the overall macroeconomic equilibrium by using aggregate supply and demand curves.

The sequence therefore runs as follows Monetary expansion bids down market interest
rates. This stimulates interest-sensitive spending on business investment, housing. net exports, and the like. Aggregate demand increases via the multiplier clinch your understanding of this vital sequence work through the opposite case of a monetary contraction. Say that the Federal Reserve decides, as·it did in 1979-1982, to raise interest rates, slow the economy, and reduce inflation. 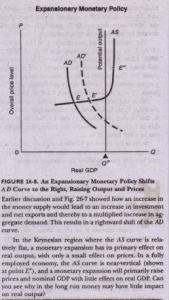 You can trace this sequence in Figure 26-7 by reversing the direction of the monetary policy, thereby seeing how . money, interest rates, investment, and aggregate demand interact when monetary policy is tightened Then see how a leftward shift of the AD curve in Figure 26-8 would reduce both output and prices.