Sometimes, rather than taxing or subsidizing a commodity. the government legislates maximum or minimum prices. History is full of examples. From biblical days, governments have limited the interest rates that lenders’ can charge (so-called usury laws). In wartime. governments often impose wage and price controls to prevent spiraling inflation. During the energy crisis of the 1970 , there were controls on ‘gasoline prices. Today, there are increasingly stringent limitations on the prices that doctors or hospitals can charge, and a few large cities” including New York. have rent controls on apartments.f Proposals to increase tile minimum wage are among the most controvertible issues of economic policy.
These kinds of interferes with the laws of supply and demand are genuinely different from those in which the government imposes a tax and then lech the market act through supply and demand. Although political pressures always exist to keep prices down and wages up. experience has taught that sector-  by-sector price and wage controls tend to create major economic distortions. Nevertheless, as Adam Smith well knew when he protested against mercantilism policies of an earlier age, most economic systems  are ,plagued by inefficiencies stemming from well-meaning but inexpert interference s with the mechanisms of supply and demand. Setting maximum or minimum prices in a market tends to produce surprising and sometimes perverse economic effects. Let’s see why. Two important examples of government intervention are the minimum wage and price controls on gasoline. These will illustrate the surprising side-effects that can arise when governments interfere with market determination of price and quantity.

The minimum wage sets a minimum on what employers are allowed to pay workers. In the United States. the federal minimum wage began in 1938 when the government required that covered workers in covered industries be paid at least 25 cents an hour. At that time. the minimum wage was about 40 percent of the average manufacturing wage. The minimum wage was raised occasionally, and by 1996 it had reached $4.25 per hour, which was only 33 percent of the average manufacturing wage rate. Because the minimum wage had declined relative to average earnings, President Clinton proposed and Congress passed a minimum-wage increase to $5.15 per hour in 1999. This is an issue that divides even the most eminent economists. For ‘example. Nobel laureate , Gary Becker stated flatly, “Hike the minimum wage.
and you put people out of work.” Another group of Nobel Prize winners countered, “We believe that the federal minimum wage can be increased by a moderate amount without significantly jeopardizing employment opportunities.” Yet another leading economist, Alan Blinder of Princeton and former economic adviser to President Clinton, wrote as follows:
The folks who earn the lowest wages have bee  suffering for years. They need all the help they can get, and they need it in. a hurry. About 40 percent of all minimum-wage employees are the sole wage earner in’ their households, and about two-thirds of the teenagers earning the minimum wage live in households with below-average incomes. Frankly. I do not know whether a modest minimum-wage increase  would decrease employment or not. If it does, the eff-eel will likely be very  mall. (Non Yo’* Times, May 23, 1996) How can nonspecialists sort through the issues when the experts are so divided? How can we resolve these apparently contradictory statements? To begin , with. we should recognize that statements on the desirability of raising the minimum wage contain personal value judgments. Such statements might be informed by the best positive economics and still make different recommendations on important policy issues. . A cool-headed analysis indicates that the minimum- wage debate centers primarily on issues of interpretation rather than fundamental disagreements
on empirical findings. Begin by looking at Figure 4-11, which depicts the market for unskilled workers.
The figure ·show show a minimum wage rate sets  a floor for most jobs. As the minimum wage rises above the  clearing equilibrium at M. the total number of jobs moves up the demand curve to E, so employment falls. The gap between  arbor supplied and labor demanded is shown as U. This represents the amount of unemployment.  Using supply and demand, we see that there is likely to be a rise in unemployment and a decrease in employment of low-skilled workers, But bow large will these magnitudes be? And what will be the impact on the wage income of low-income workers? On these questions, we can look at the  empirical evidence. 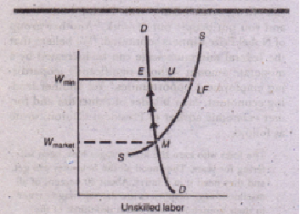 FIGURE 4-11. Effects of a Minimum Wage

Setting the minimum-wage-floor at high above the free-market equilibrium rate at Snorkel> result sin employment
at E. Employment is reduced. as the .arrows show, Fromm to E. Additionally.unemployment is V. which is the difference between labor supplied at I.F and employment at E. If the demand curve is inelastic,increasing the multimillionaire the.income of low-caseworker. To ~ this. shade in the rectangle of total wherefore and after the minimum-wage increase. Most studies indicate that a 10 percent increase in the minimum wage would reduce employment of
teenagers by between 1 and 3 percent. The impact ” on adult employment is even smaller. 8,: recent studies put the employment effects very close to zero, and one set of studies suggests that employment might even increase. So a careful reading of the quotations from the eminent economists indicates that some economists consider small to be “insignificant” while others emphasize the existence of at least some job losses. Our example in Figure 4-11 shows a case where the unemployment decline (shown as the difference between M and E) is Very small while the unemployment caused by the minimum wage (shown by the U line) is relatively large. Another factor in the debate relates to the impact
of the minimum wage on icon mes. Virtually every study concludes that the demand for low-wage workers is price-inelastic. The results we just cited indicate that the price elasticity is between 0.1 and 0.3. This leads to the surprising conclusion that are using the minimum wage would increase the incomes of low income women! as a whole. Given the elasticities just  cited, a 10 percent increase in the minimum wage will.increase the incomes of the affected groups by 7 to 9 percent. Figure 4-11 shows how the incomes of low-income workers rise despite the decline in  their total plummet. This Can be seen by comparing
the income rectangles under the equilibrium  points E and M. (See question 8 at the end of this chapter.) ‘1
The impact on incomes is yet another reason why people may disagree about the minimum wage. Those who are particularly concerned about the welfare of low-income groups may feel that modest inefficiencies are a small price to pay for higher incomes. Others-who worry more about the cumulative costs of market interference s or about the ·impact of higher costs upon prices. profits, and international competitiveness-may hold that the efficient essences are too high a”price. Still others might believe that the minimum wage is an inefficient way to transfer hi-overpowering to low-income groups; they would prefer using direct income transfers or government wage subsidies rather than gumming up the wage system. How important are each of these three concerns to you? Depending upon your priorities, you might reach quite different” conclusions on the livability of increasing the minimum wage.