But Figure 7-2(b) also shows that there is an important link between MC and .4C: When the ,\fC of an added unit of output is below its AC, its AC is dedining: And when MC is above AC, AC is increasing. At the point where M~ equals AC, the AC curve is flat. For the typical U-shaped AC curve, the point where MC eqcals AC is also the point where AC hits its minimum level, Check this for yourself on the graph. 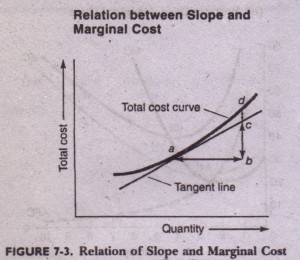 Focus a microscope on the total cost curve to examine the cost of going from an output of 3999 to 4000. The figure clarifies the distinction between (I) MC as the increments cost for a finite-step change in output and (2) MCas the cost for an infinitesimal change in output measured by the tangent, TIle distance from a to b represents I extra unit of output. The b to d distance represents the resulting increase in total cost. Hence MC = (d:- b)/(b – a). which is first and simplest definition of marginal cost.

The second definition of marginal cost i~ as the slope total cost curve. The slope of the curve at point a by the slope of the tangent at point n, which is the distance from b to c divided by the distance b. In the limit for a smooth curve, as the size of increment becomes smaller and smalIer and we ~cz.caI;ne the ratios in the new, smaller triangle, the ennoble the two definitions becomes negligible.

Remember these important rules:
• A’hen margin a below average cost it pulling average cost down.
• When MC is above AC, it is pulling Cup.
• When MC just equals AC, AC is neither rising nor falling and is at its minimum. Hence. at the bottom of a L-shaped AC. Me = AC = minimum AC.

This, is a critical relationship. It means that a firm searching for the lowest average cost of production should look for the level of output at which marginal costs equal average costs.