The most common measure of market power is the for an industry, illustrated in Figure 10-1. The four-firm concentration ratio is defined as the percent of total industry production (or shipments! that is accounted for by the largest four firms, Similarly, the eight-firm ratio is the percent of output shipped by the top eight firms. In a pure monopoly, the four- and eight-firm concentration ratios would be 100 percent because one firm produces 100 percent of the output, while for perfect, both ratios would be close to zero because even the largest firms produce a tiny fraction of industry output. Manv economists believe that traditional conceutration ratios do not adequately. measure market power. An alternative, which better captures the role of dominant firms, is the Index (HHI). This is calculated by summing the squares of the percentage market shares “of all participants in a market. Perfect competition would have an HHI of near zero, while complete monopoly has an HHI of 10,000.

To illustrate the difference between these two measures, the four-firm concentration ratios in the beer and airline industries are not far apart (H5 and it percent, respectively. Yet the beer industry is dominated by Anheuser-Busch, while the market share of the leading is much smaller. So when ‘\C(> calculate the alternative index, the beer industry has an HHI of 2757 while the airline industry’s only 1434. 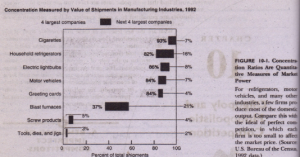