We must, however, add that though the gloomy fare casts of Malthus have not turned out to be true due to several factors which have made their appearance only in recent times, yet the essentials of the theory have not been demolished. He said that  preventive checks were exercised, positive would operate. This is true even today.

The Malthusian theory fully applies to countries like India. India is, at present, in that unenviable positio which Malthus feared. We have the highest birh-rate and the highest death-rate in the world. Grinding poverty, ever-recurring epidemics, famine, communal quarrels are the order of the day. We are deficient in food supply. Our standard of living is incredibly low. Who can say that , Ialthus was not a true prophet. if not for his country. at any rate for countries like India and China.

Under-population and its Disadvantages, If the population of a country is below the optimum, i.e., below what it ought to be, then the country is said to be under-populated. The number of the people is insufficient to take the fullest possible advantage of the natural and capital resources of the country. This is what happens in a new country. The resources are vast. Much can be produced, but there are not men enough to carry on the work of production efficiently

Per  income will diminish; standard of living will fall; war famine and disease will be constant companions of such a people. These are the symptoms of over-population. Capital formation will be hampered and economic development will be slowed down. The dangers of over-population, however, can be avoided by increasing the supply of capital. There is a race between productivity and population. If productivity wins the race, the danger is averted. To be Optimum, Let us suppose that natural resources, stock of capital equipment and state of technology remain fixed in a country. Now assume that population which was initially very small relative to these other resources begins to increase. With the increase in population, labor force of the country will also increase. As more and more labor-is combined with the fixed amounts of these other resources, output per  or real income per head will rise. Why ?

This is because the increase in the quantity of labor will make possible greater degree of specialization and more efficient use of natural and capital resources of the country. With a very small population or labor force, there was a limited scope for specialization, for each worker was required to do all sorts of jobs. But as population and, therefore, the quantity of lab our increases, specialization becomes possible. Each man then need not do all the jobs or make all parts of a good. Everybody can concentrate on the job for which he is best suited. Division of lab our among the different workers, which is made possible by the increase in population, greatly increases the efficiency arc productivity of labor.

An increase in population will also perm Cullen utilization of the natural resources and c pi equipment. If the quantity of labor is smart  to the natural resources. then even the actually av resources remain under-utilized. Many  available resources, which can be utilize producing goods, would not be utilized for labor. Moreover; even the capital equipment be fully and effectively utilized if there 1 of labor. Technology requires that be of a certain minimum size, whet  relatively small or large. Capital equip be fully utilized if only a small numeral available to work with it. In other will be relatively

Beyond the Optimum. Why does the output per capital fall when the optimum point is exceeded? This is because there are now more men in the economy than needed by it. A given amount of capital and natural resources have to be shared out among a large number , of workers with the result that each of them has a smaller amount of equipment. materials and natural resources to work with. For this reason the average productivity declines. It is very likely that many people may not get employment and. therefore. add nothing to production. Thus, there is likely to be unemployment of labor. It so happens that when people do not get employment outside agriculture. they cling to agriculture. The pressure of population on land increases. But the additional men. who get employment
in agriculture. add nothing to  production. 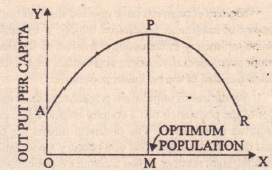 The concept is relative to natural resources, capital equipment and state of technical knowledge. It is assumed that they remain the same. Since these factors are subject to constant change, the optimum is a constantly shifting concept. As such we can seldom arrive at a stable optimum which may have significance in economic analysis and practice. Thus, the theory is based on wrong assumptions.

The theory ignores political, social. strategic and other aspects of the population problem and considers only the economic aspect. For instance, a small population may be advocated on economic grounds but it will be dangerous from the point of view of defence. Adam Smith rightly said.Defence is better than opulence.”The concept of the optimum population is only of theoretical interest. Actually, it is not easy to attain the optimum size by reducing population in the case of over-population and increas in it in the case of under-population. Family planning, whether aiming at reducing population or increasing it, is a long drawn fair extending over several generations. Human are more influenced by culture and traditions by rigid government regulation.