Since its origins. capitalism has been plagued by periodic bouts of inflation (rising prices) and recession (high unemployment). Since World War II. for ex-  ample. there have been nine recessions in the United ‘ States. some putting millions of people out of work.  These fluctuations are known as the business cycle.

Today thanks to the intellectual contribution of  John Maynard Keynes and his followers. we know how to control the worst excesses of the business cycle By careful use of fiscal and monetary policies. governments can affect output. employment. and in-  flatiron. The fiscal policies of government involve the  power to tax and the power to spend. Monetary pol- icy involves determining the supply of money .and in-  retest rates; these affect investment in capital goods and other interest-rate-sensitive spending. Using  these two fundamental tools of macroeconomic pol- icy. governments can influence the level of total  spending. the rate of growth and level of output. the  levels of employment and unemployment. and the price level and rate of inflation it? ‘an economy.

Governments in advanced industrial countries  have successfully applied the lessons of the Keynesian revolution over the last half-century. Spurred on by active monetary’ and fiscal policies. the market economies witnessed a period of unprecedented economic growth in the three decades after World War II.

In the 1980s. governments became more concerned with also designing macroeconomic policies to promote long-term objectives. such as economic  growth and productivity. (Economic growth denotes the growth in a nation’s total output. while productivity represents the output per unit input or the efficiency with which resources are used.) For example. tax rates were lowered in most industrial countries in order to improve incentives for saving and production. Many economists emphasized the importance of public saving through smaller budget deficits as a way to increase national saving and investment.

Macroeconomic policies for stabilization and economic growth include fiscal policies (of taxing and spending) along with monetary policies (which affect interest rates and credit conditions). Since the development of macroeconomics in the 1930s. gov governments have succeeded.in curbing the worst excesses of inflation and unemployment. 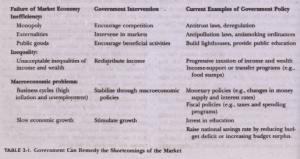 A fairer distribution of income, and pursuing the macroeconomic objectives of economic growth and stability. In all advanced industrial societies we find some variant of a mined economy, in which the market determines output and prices in most individual sectors while government steers the overall economy with programs of taxation, spending, and monetary regulation.

TWILIGHT OF THE WELFARE STATE?

In 1942, the great Austria-born Harvard economist Joseph Schumpeter argued that the United States was .”capitalism living in an oxygen tent” on its ~arc~ to socialism. Capitalism’s success would breed alienation and self-doubt, sapping its efficiency and innovation.But-he was wrong. The next half-century saw sustained growth in government’s involvement in the economies of North America and Western Europe, along With the mast impressive economic performance ever Corded.

Rapid economic growth has been accompanied by increased skepticism about govern,em’s roe.Critics of government say that the state IS overly In- intrusive; governments create monopoly; government failures are just as pervasive .as market failures: high taxes distort the allocation, of resources; social security threatens to overload workers in the dudes
ahead;’ environmental regulation dulls the spirit of enterprise; government attempts ‘to stabilize the economy must fail at best and increase inflation at worst. In short, for some, government is the problem rather than the solution.