Home » Unemployment » LABOR FORCE PARTICIPATION OF MEN AND WOMEN IN THE U.S. ECONOMY

LABOR FORCE PARTICIPATION OF MEN AND WOMEN IN THE U.S. ECONOMY

Women’s role in American society has changed dramatically  the past century. Social commentators have pointed to many causes for this change. In part, it Suitable to new”technologies, such as the washing machine, clothes dryer, refrigerator, freezer, and dishwasher,  have reduced the amount of time required to complete routine household tasks In part, it is attributable to improved birth control, which has reduced the number of children born to the typical family. This change in women’s role is also partly attributable to changing political and social attitudes, which in turn may have been facilitated by the advances in technology and birth control. Together these developments have had a profound impact on society in general and on the economy in particular. Nowhere is that impact more obvious than in data on labor-force participation.

Figure 3 shows the labor-force participation rates of men and women in the United States since 1950. Just after World Ward, men and women had very different roles in society. Only 33 percent of women were working or looking .

Figure 3 Labor-Force Participation Rates for Men and Women since 1950
This figure shows the percentage of adult men and women who are members of the labor force. It shows that over the past several decades, women have entered the labor force, and men have left it. 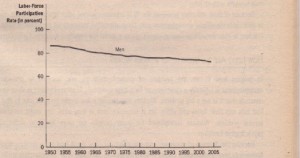 LABOR FORCE PARTICIPATION OF MEN AND WOMEN IN THE U.S. ECONOMY

for work, in contrast to 87 percent of men. Over the past several decades, the difference between the participation rates of men and women has gradually diminished, as growing numbers of women have entered the labor force and some men have left it. Data for 2004 show  hat 59 percent of women were in the labor force, in contrast to 73 percent of men. As measured by labor-force participation, men and women are now playing a more equal role in the economy. The increase in women’s labor-force participation is easy to understand, but the fall in men’s may seem puzzling. There are several reasons for this decline. First, young men now stay in school longer than their . fathers and grandfathers did. Second, older men now retire earlier and live longer. Third, with more women employed, more fathers now stay at home to raise their children. Full-time students, retirees, and stay-at home fathers are all counted as out of the labor force.