According to Kalki, the distribution of national income into profits and wages depends upon the degree of monopoly in the economy. The degree of monopoly of a JIlin is measured h) ‘I’-a) which is the difference between the price of the HOUNd and the average cost on manual labour and Ia materials per unit of output, This difference Is made up of entrepreneurial profits, interest, depreciation and salaries and thus represents gross capitalist in l’II,c (inclusive of salaries) per unit of output. We call get his total income by multiplying II by the total number of units produced. AI~o, in order to get the glass capitalist in- of the economy as a whole. we have to sum up the poss capitalist incomes of all firms which  may be represented by the formula Lx (p-a). II we  is given by the formula Wagcs National Income. This share is inversely related to the degree of monopoly power. III other words, increase in the degree of 11I0- nopoly power will reduce the relative share of wages (i.c, manual labour’s share). Labour’s share, in national income has remained constant by and large. This. according to Kalecki is 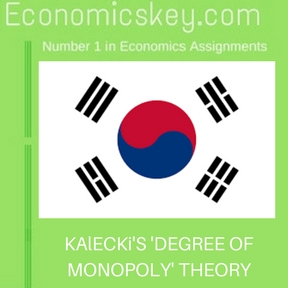