THE MARKET FORCES OF SUPPLY AND DEMAND

To determine an equilibrium with the help of fiscal policy and monetary policy:
Fiscal policy came to the forefront aft er the sync sin revolution of 1936. It was Keynes functional finance approach, which helped in rescuing the economics, which was shaken  by the great depression. Even today it i the fiscal policy which has dominated the  policy making of the governments all over the world irrespective of whether they arc developed or under developed. On the other hand n;onctorisls still arc of the opinion that “economy is essentially to a greater extent based on monetary phenomenon. Though today  it is the monetary revolution which has resulted ill a greater degree of flexibility in the economics. For the time being it may be the monetary cconom- .ics which is dominating in the form of the role of international financial  the developed as well as underdeveloped countrics financial institutions, flow of easy capital (portfolio as well as direct foreign investments), the governments deficit finance pol icies, the innovation in banking sy tcn 1ile  of ATM, credit cards, easy availability  for whether productive purpose or non prod  e purpose, and the change in the habits and f demand for money has resulted in the dynamo m f the economies of the world. “It is very  predict the collapse of international monetary as  well as the domination of . en  in the economy ill the days to follow”

Conclusions
Thus, policy for full employment must embrace suitable fiscal policy, monetary policy, income policy, price policy and international measures to achieve and maintain a high level of income and employment. A sound  policy for full employment must control economic fluctuations and for this tax rates should be properly adjusted and public expenditure properly channelized. Interest rates should be suitably adjusted by a wise monetary policy, In the matter of income policy, wage rates should be so controlled as to promote an equilibrium ratio of wages to- profits: there should be a balanced wage structure. Consumption
should be controlled, propensity to consume raised and private investment stimulated and public investment increased. 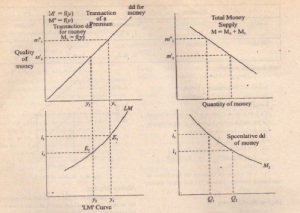 is a perfectly inelastic supply curve ‘QS’. (In other words the supply of money is fixed in an economy by the government). On y-axis the rate of interest is taken ‘LP
l ‘ and ‘LPz’ are two liquidity preference of a ccommoditywhich intersects at ‘point’ ‘kl’ and ‘kz’, on the ‘QS’ curve. Now we extend this to the next diagram ‘B’. On the right hand side ‘x’-axis is t e ‘real income’ of an economy, whereas on y-axis interest rate is taken … ii’ k , is extended (as shown in the figure) to the figure ‘b, in the same way we extend ‘iz’ kz’ then we can join these two points ‘k!, kz’ we get an upward moving curve that is the ‘Ut’ curve. This UI curve is nothing but the relationship
between the rate of interest and the real income. In lither words, lower the rate of interest, lower is the income (OIl -} 0)’1) and higher the interest higher is the level of income (oiz -} oYz)· Equilibrium of Income (Employment) and rate of interest the aim of ISuit curve is to obtain the equilibrium level of income and employment in the Keynesian .

More from Category: THE MARKET FORCES OF SUPPLY AND DEMAND