The idea of a backward-sloping labor-supply curve might at first seem like a mere theoretical curiosity, but in fact, ‘it is not. Evidence’indicates that the labor-supply curve, considered over long periods of time, does in fact slope backward. A hundred years ago,  many people worked 6 days a week. Today, S-day workweeks are the norm. At the same time that the length of the workweek has been falling, the wage of the typical worker (adjusted for inflation) has been rising.

Figure 14 An Increase in the Wage
The two panels of this figure show how a person might respond to an increase in the wage. The graphs on the left show the consumer’s initial budget constraint. 8Cl’ and new budget constraint, 8C2, as well as the consumer’s optimal choices over consumption and leisure. The graphs on the right show the resulting labor supply curve. Because hours worked equal total hours available minus hours of leisure, any change in leisure implies an opposite change in the quantity of labor supplied. In panel (a), when the wage rises, consumption rises and leisure falls, resulting in a labor-supply curve that slopes upward. In panel (b), when the wage rises, both consumption and leisure rise, resulting in a labor-supply curve that slopes backward. 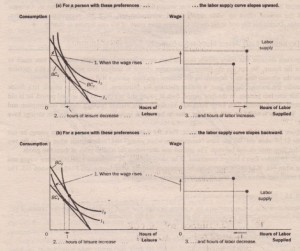 An Increase in the Wage

Here is how economists explain this historical pattern: Over time: advances in technology raise workers’ productivity and, thereby, the demand’ for labor, The increase in labor demand raises equilibrium wages. As wages rise, so does the reward for working. Yet rather than responding to. this increased incentive by working more, most’ workers choose to take part of their greater. prosperity ill the form of more leisure. In other Words, the income effect of higher wages dominates the substitution effect Further evidence that the income effect. on labor supply is strong comes. from a very different kind .of data: winners of lotteries. Winners of large prizes in the lottery see large increases.in their incomes and, as a result, large outward shifts in their budget constraints. Because have not changed, however, the slopes of their budget constraints remain the same. There is, therefore, no substitution effect By examining the behavior of lottery winners, we can isolate the income effect on labor supply.

The results from studies of lottery winners are striking. Of those winners who win more than $50,000, almost 25 percent quit working within a year, and another 9 percent reduce the number of hours they work. Of those winners who win more than $1 million, almost 40 percent stop working. The income effect on labor supply of winning such a large prize is substantial. Similar results were found in a 1993 study, published in the Quarterly Journal of Economics, of how receiving a bequest affects a person’s labor supply. The study found that a single person who inherits more than $150,000 is four times as likely to stop working as a single person who inherits less than $25,000. This finding would not have surprised the 19th-century industrialist Andrew Carnegie. Carnegie warned that “the parent who leaves his son enormous wealth generally deadens the talents and energies of the son, and tempts him to lead a less useful and less worthy life than he otherwise would.” That is, Carnegie viewed the income effect on labor supply to be substantial and, from his paternalistic perspective, regrettable. During his life and at his death, Carnegie gave much of his vast fortune to charity.