Home » The Theory of Consumer Choice » INCOME AND SUBSTITUTION EFFECTS

The impact of a change in the price of a good on consumption can be decomposed into two effects an income effect and a substitution effect. To see what these two effects are, consider how our consumer might respond when he learns that the price of Pepsi has fallen. He might reason in the following ways

• “Great news! Now that Pepsi is cheaper, my income has greater purchasing power. I am, in effect, richer than I was. Because I am richer, I can buy both more Pepsi and more pizza.” (This is the income effect.)

Figure 10 shows graphically how to decompose the change in the consumer’s decision into the income effect and the substitution effect. When the price of Pepsi falls, the consumer moves from the initial optimum, point A, to the new optimum, point C. We can view this change as occurring in two steps. First, the consumer moves along the initial indifference curve, 1\, from point A to point B. The consumer is equally happy at these two points, but at point B, the marginal rate of substitution reflects the new relative price. (The dashed line through point B reflects the new relative price by being parallel to the new budget constraint.) Next, the consumer shifts to the higher indifference curve, 12, by moving from point B to 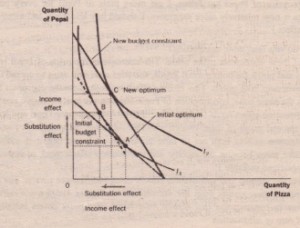