Home » Money Growth and Inflation » In The News

In The News Economics Assignment Help

The German experience between the two world wars remains one of history’s most vivid examples of hyperinflation and its horrific consequences.

For these ten marks I sold my virtue,” were the words a Berliner noticed written on a banknote in 1923. He was buying a box of matches, all the note was worth by then. That was in the early days. By November 5th, a loaf of bread cost 140 billion marks. Workers were paid twice a day, and given half-hour breaks to rush to the shops with their satchels, suitcases or wheelbarrow, to hut something, anything, he fore their paper money halved in value yet again. By mid-November, when a new currency was issued, prices had added twelve zeros since the first world war began in 1914.

Currencies have collapsed, and inflation turned hyper-, in other places: in Shanghai awaiting Maoist takeover in 1949, in Argentina in 1989, in July alone, prices rose 197%. But Germany’s was the most spectacular bout of inflation ever to hit an advanced economy; and none has had more awful results. It was not the main reason for Hitler’s rise, but it was as the leader of a failed mini-coup during the crisis that most Germans first heard of him. And the anger of those who had lost their all fed Nazism’s growth.

The origins of the hyperinflation lay in the war, and the readiness of Germany’s legislature to let the authorities suspend the individual’s right to convert banknotes into gold. The central bank was also authorized to use government and commercial paper as part of the reserves it was required to hold against newly issued notes. This freed the government to finance the war by running the printing presses, with the usual effect: prices rose. By the end of 1918 the mark had fallen more than 50% against the dollar.

The government continued to run a huge deficit. From 1919 to 1923, taxes never exceeded 35% of expenditure. The gap was covered by heroic money-printing. The public finances, bad enough anyway, were worsened by the Allies’ demands for reparations, enough not just to compensate for damage done but to pay the pensions of Allied combatants. Even ignoring the part due to be paid in some bonds of dubious worth, the total was $12.5 billion-a huge amount for the time, about half Britain’s GDP. How could it be found? The Allies did not want to see German exports boom, nor were they united in encouraging payment in labor to rebuild Europe. So roll the presses. Notes in circulation increased from 29.2 hill ion marks in November 1918 to  497 Quintilian (497 plus 18 zeros) five years later.

As early as 1919, when the peace treaty was signed, Keynes had warned that the settlement imposed on Germany would ruin it. By early 1922, even the Times, much given to berating Germany for allegedly failing to meet its promises to disarm, was warning that the Allied demands would lead to further product ion of paper marks on a massive scale. In the present state of German finances, that would mean a big step on the way to Moscow.” To Auschwitz, in the event, but the analysis of money-printing was sound enough. In vain: the victorious powers shut their ears .

. Later that year, the German government defaulted on its reparations payments. In response, in January 1923 French and Belgian troops occupied the Ruhr, Germany’s industrial heartland. The direct economic cost was huge; the Ruhr provided 85% of Germany’s coal. But, besides that, the government backed a campaign of passive resistance–in effect, a general strike. To pay the 2 million workers involved, it printed more money. This was enough to tip the economy over the edge.

Prices roared up. So did unemployment, modest as 1923 began. As October ended, 19% of metal-workers were officially out of work, and half of those left were on short time. Feeble attempts had been made to stabilize prices.

Some German states had issued their own would-be stable currency: Baden’s was secured on the revenue of state forests, Hanover’s convertible into a given quantity of rye. The central authorities issued what became known as gold loan notes, payable in 1935. Then, on November 15th, came the Rearmament, worth 1,000 billion paper marks, or just under 24 American cents, like the gold mark of 1914.

Prices quite soon stabilized, but the damage was done. Millions had seen their life savings evaporate, and were ready later to believe that Germany had been stabbed in the back by a conspiracy of Jews,international financiers and local appeasers. Elias Canetti, a German writer, likened the Nazis’ treatment of Jews to the great inflation: depreciation to the point where they could be “destroyed with impunity by the million.”He strained the analogy. But he was right that a debauched currency was one reason why a whole country could lose its virtue.

This way of looking at the nominal interest rate is useful because different economic forces determine each of the two terms on the right side of this equation. As we discussed earlier in the book, the supply and demand for loan able funds determine the real interest rate. And according to the quantity theory of money, growth in the money supply determines the inflation rate.

Figure 5 The Nominal Interest Rate and the Inflation Rate 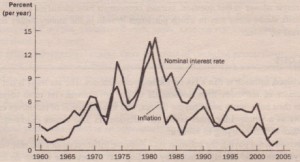