The Challenge of Economic Development

Population Explosion: The Legacy of Math us Many poor countries are forever running hard just to stay in place. Even as a poor nation’s GD prices , so does its population. Recall our discussion in Chapter 27 of the Malthusian population trap, where population  grows so rapidly that incomes remain at subsistence levels.While the high-income countries left Malthus behind long ago, Africa is still caught in the Malthusian bind of high .birth rates and stagnant incomes. And the population expansion has not stopped-demographers project that the poor countries will add about 1 billion people over the next 25 years.. . It’s hard for poor countries to overcome poverty with birth rates so high. But there are escape routes from overpopulation. One strategy is to take an active role in curbing population growth, even when such actions run against prevailing religious norms . Many countries have introduced educational and subsidized birth control. China has been particularly forceful in curbing population growth among its more than 1 billion inhabitants, putting tight quotas on the number M births and imposing economic penalties and mandatory sterilization on those who violate.their “baby quota And for countries which manage to boost their per capital incomes, there prospect of making the demographic transition, which when a population stabilizes with low birth rates and low death rates. Once. countries ‘get rich enough and infant. 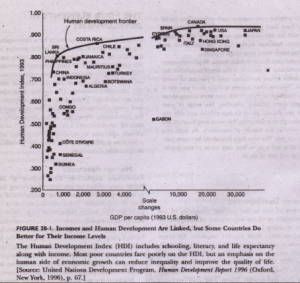 But the demographic transition has not been reached everywhere. Fertility continues at a rapid pace in much of tropical Africa even as an AIDS epidemic rages through the population and lowers life ( expectancy in a way not experienced since the great plagues of earlier centuries. The specter of Malthus hangs over much of central Africa.

More from Category: The Challenge of Economic Development