How to Measure Inequality among Income Classes Economics Assignment Help

How to Measure Inequality among Income Classes

Any actual income distribution, such as that for 1998, “ill fall between the extremes of absolute  equality and absolute inequality. The blue-colored column (6) in Table 19-2 presents the data derived • from the first two’columns in a form suitable for plotting as an actual Lorenz curve. This actual Lorenz . curve appears in Figure 19-1 as the solid blue intermediate curve. The shaded area indicates the deviation from absolute equality, hence giving us a of the degree of inequality of income distribution. A quantitative measure of inequality that is often used is the Gin; coefficient, which is the shaded area in Figure 9-1 divided by the total area of the triangle by the absolute-equality and absolute inequality  curves. 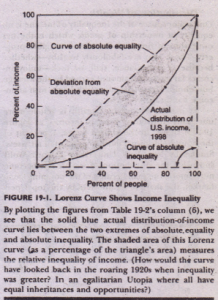 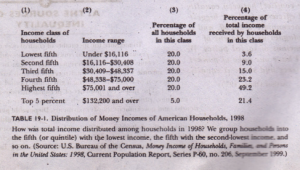