To understand the role of government in economic activity.we need to look at government purchases and taxation. along with the effects of those activities on private sector spending. & you’ might guess, we now add G to get a C + 1+ G spending schedule for charting macroeconomic equilibrium when, with its spending and taxing. is in the picture.

It will simplify our task in the beginning if we analyze the effects of government purchases with total taxes collected held constant (taxes that do not change with income or other economic variables are called “‘.$V). But even with a fixed dollar value of taxes, we can no longer ignore the distinction between disposable income and gross domestic product. Under simplified conditions (including no foreign trade transfers or depreciation). we know from Chapter 21 that GDP equals disposable income.

Why do we simply add G on the top? Because spending on government buildings (G) has the same macroeconomic impact as spending on private buildings (1) the connective expenditure buying a government vehicle (G) has the same effect on jobs as private consumption expenditures on automobiles (C) Wind up with the three Layer cake of C + 1+ G, calculating the amount of total spending forthcoming at each level of We now must go to its point of intersection with the 45- line to find the equilibrium level of GDP. At.this equilibrium GDP level, denoted by point Figure 24-7, total planned spending exactly equals total planned output. Point E is thus the equilibrium level of output when we add government purchases to the multiplier model. 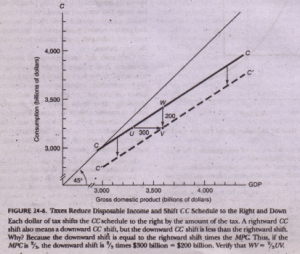 More from Category: The Multiplier Model