How Do WAGES AFFECT LABOR SUPPLY

between two goods. We can use the same theory to analyze how a person decides to allocate time between work and leisure Consider the decision facing Sally, a freelance software designer. Sally is awake for 100 hours week She spends some of this time enjoying leisure-riding her bike, watching television, studying economics, and so on. She spends the rest of this time developing software at her computer. For every how she works developing software, she earns $50, which she spends on consumption goods. Thus, her wage ($50) reflects the trade-off Sally faces between leisure and consumption. For every hour of leisure she gives up, she works one more hour and gets $50 of consumption Figure 13 shows Sally’s budget constraint. If she spends all 100 hours enjoying leisure, she has consumption. If she spends all 100 hours working, she earns a weekly consumption of $5,000 but has time for leisure. If she works a normal 40-hour week, she enjoys 60 hours of leisure and has weekly consumption of $2,000.

This figure shows Sally’s budget constraint for deciding how much to work, her indifference curves for consumption and leisure, and her optimum. 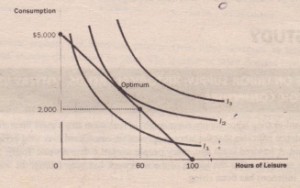 Figure 13 uses indifference curves to represent Sally’s preferences for consumption and leisure. Here consumption and leisure are the two “goods” between which Sally is choosing. Because Sally always prefers more leisure and more consumption, she prefers points on higher indifference curves to points on lower ones. At a wage of $50 per hour, Sally chooses a combination of consumption and leisure represented by the point labeled “optimum.” This is the point on the budget constraint that is on the highest possible indifference curve, which is curve 12, Now consider what happens when Sally’s wage increases from $50 to $60 per hour. Figure 14 shows two possible outcomes. In each case, the budget constraint, shown in the left graph, shifts outward from BCI to BC2 In the process, the budget constraint becomes steeper, reflecting the change in relative price: At the higher wage, Sally gets more consumption for every hour of leisure that she gives up.
Sally’s preferences, as represented by her indifference curves, determine the resulting responses of consumption and leisure to the higher wage. In both panels, consumption rises. Yet the response of leisure to the change in the wage is in the two cases. In panel (a), Sally respond to the higher wage by enjoying less leisure. In panel (b), Sally responds by enjoying more leisure. Sally’s decision between leisure and consumption determines her supply of labor because the more leisure she enjoys, the less time she has left to work. In each panel, the right graph in Figure 14 shows the labor-supply curve implied by Sally’s decision. In panel. (a), a higher wage induces Sally to enjoy less leisure and work more, so the labor supply-curve slopes upward. In panel (b), a higher wage induces Sally to enjoy more leisure and work less, so the labor-supply curve slopes “backward. At first, the backward-sloping labor supply-curve is puzzling. Why would a person respond to a higher wage by working less? The answer comes from considering the income and substitution effects of a higher wage. Consider first the substitution effect. When Sally’s wage rises, leisure becomes more costly relative to consumption, and this encourages Sally to substitute consumption for leisure. In other words the substitution effect induces Sally to work harder in response to higher wages, which tends to make the
labor-supply curve slope upward. Now consider the income effect.When Sally’s wage rises, she moves to a higher indifference curve. She is now better off than she, was. As lung as consumption and leisure are both normal goods, she tends to want to use this increase in well-being to enjoy both higher consumption and greater leisure. In other words, the income effect induces her to work less, which tends to make the labor-supply curve slope backward In the end, economic theory does not give a clear prediction about whether an increase in the wage induces Sally to work more or less. If the substitution effect is greater than the income effect for Sally, she works more. If the income effect is greater than the substitution effect, she works less. The labor-supply curve, therefore, could be either upward ‘or backward sloping .