How CHANGES IN INCOME AFFECT THE CONSUMER’S CHOICES

Figure 7 An Increase in Income.

When the consumer’s income rises, the budget constraint shifts out. If both goods are normal goods, the consumer responds to the increase in income by buying more of both of them. Here the consumer buys more pizza and more Pepsi. 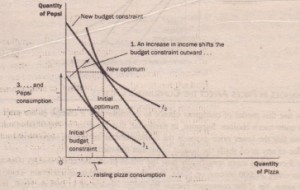 How CHANGES IN INCOME AFFECT THE CONSUMER’S CHOICES

The expanded budget constraint allows the consumer to choose a better combination of Pepsi and pizza. In other words, the consumer can now reach a higher indifference curve. Given the shift in the budget constraint and the consumer’s preferences as represented by his is difference curves, the consumer’s optimum moves from the point labeled “initial optimum” to labeled “new optimum.” Notice that, in Figure 7, the consumer chooses to consume more Pepsi and more pizza. Although the logic of the model does not require increased consumption of both goods in response to increased income  this situation is the most common one. As you may recall from Chapter 4, if a consumer wants more of a good when his income rises, economists call it a normal good. The indifference curves in Figure 7  drawn under the assumption that both Pepsi and pizza are normal goods. Figure 8 shows an example in which an increase in income induces the consumer to buy more pizza by less Pepsi. If a consumer buys less of a good when his income rises, economists call it an inferior good Figure 8 is drawn under the assumption that pizza is a normal good and Pepsi is an inferior good. Although most goods are normal goods, there are some inferior goods in the world. One example is but rides. High-income consumers are more likely to own cars and less likely to ride a bus than low-income consumers. Bus rides, therefore, are an inferior good. Figure 8 An Inferior Good A good is an inferior good if the consumer buys less of it when his income rises. Here Pepsi is an inferior good When the consumer’s income increases and the budget constraint shifts outward, the consumer buys more pizza but less Pepsi.

2How CHANGES IN INCOME AFFECT THE CONSUMER’S CHOICES