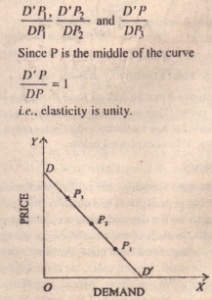 The words of Baumel. Arc elasticity is a measure of the average responsiveness to price changes exhibited by a demand curve over some finite stretch of the curve.” Any two points on a demand curve make an arc. The area between P and M on the DO curve  an arc which measures elasticity over a certain range of prices and quantities.

Slope Indicating Elasticity. We can. however, conceive of one case where the relative elasticity of two curves can be known from their respective slopes. Suppose there are two curves, AB and CD, representing the demand for the same good ill separate markets as shown in the following diagram.

Then elasticity of demand at the point R is. 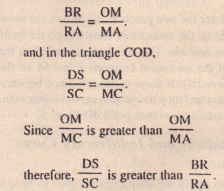