FROM THE PRODUCTION FUNCTION TO THE TOTAL-COST CURVE

The last three columns of Table 1 show Helen’s cost of producing cookies. In this example, the cost of Helen’s factory is $30 per hour, and the cost of a worker is $10 per hour. If she hires 1 worker, her total cost is $40. If she hires 2 workers, her total cost is $50 and so on. With this information, the table now shows how the number of workers Helen hires is related to the quantity of cookies she produces and to her  total cost of production.

Our goal in the next several chapters is to study firms’ production and pricing decisions. For this purpose, , the most important relationship in Table 1 is between quantity produced (in the second column) and total costs (in the sixth column). Panel’ (b) of Figure 2 graphs these two columns of data with the quantity produced on the horizontal axis and total cost on the vertical axis. This graph is called the total-cost curve.

The production function in panel (a) shows the relationship between the number of workers hired and the quantity of output produced. Here-the number of workers hired (on the horizontal axis) is from the first column in Table 1, and the quantity of output produced (on the vertical axis) is from the second column. The production function gets. flatter-as the number, of workers increases, which reflects diminishing marginal product. 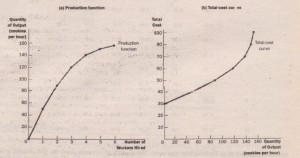 Now compare the total-cost curve in panel (b) with the production function in ‘panel (a), These two curves are opposite sides of the same coin. The total-cost curve gets steeper as the amount produced rises, whereas the production function gets flatter as production rises. These changes in slope occur for the same reason. High production of cookies means that Helen’s kitchen is crowded with many workers. Because the kitchen is crowded, each additional worker adds less to production, reflecting diminishing marginal product.