Most of the countries of and Africa, which arc under-developed, have been at one time or another under an alien rule. The most important cause of poverty in India and its uniquer-development i it subjection to the British rule. The foreign rulers, naturally, exploited the dependent countries and used their resources to promote their own interests. These council ere made to supply raw materials at low prices.
The foreign industrialists also made investments in primary industries such as mining, drilling of oil wells, tea, rubber plantations, etc., the products of which were exported. The domestic cos w ere exploited and were paid very low wages. High profits thus made were taken out of the country. They sold their manufactures in the under-developed countries III exchange for raw materials.

Thus. the foreign masters u ed the e countries as suppliers of raw materials to their industries and markets for their manufactured goods. Riley did not take any interest in their economic development, Rather, there is ample evidence to show that they raised all 1st of obstacles in the  of their industrial development :IS in wherewithal competing small and cottage Hindu true ere destroyed by the unfair use of the political weapon. This resulted in increasing pressure on agriculture, disguised unemployment and poverty. That is how foreign d ruination has been a great impediment in the economic growth of under-developed  tries. Now that these countries are free they can plan their own development use of resources owing to market imperfections. By the mallet imperfections we mean the insolubility of the factors of production, price digitizes, ignorance regarding market trends, static social structure, lack of specialization, etc., These market imperfections are great obstacles in the way of economic growth. It is due to market imperfections that productive efficiency in these countries is low, the resources are either unfertilized or under-utilized and the resources are allocated.

To the extent of these imperfections, the resources of their countries are misused or under-util seed. There is no doubt that the output in these countries can be increased by fuller and better use of the productive resources by removing these market imperfections. This can be made clear by the production possibility curve given below:

We have said above that owing to market imperfections, the under-developed countries are not making the fullest and most efficient use of their productive resources with the result that these resources remain undisguised or under-utilized in large quantities. In  such it situation, their economy does not operate on the production possibility curve but at a point below it, e.g  at the point U in the diagram. By removing the market imperfection by making fuller and optimum use of their resources, the under-developed countries can move from a point below the curve to some point on the production possibility curve and thus raise the level of national income and output. In this way. economic development of the country can be accelerated 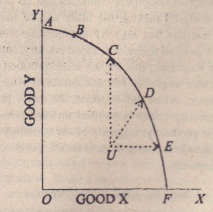 It may be’ pointed out that economic development of under-development countries can be promoted not merely by making the fuller use of their available resources but also by augmenting these . resources. When in an under-developed country formation increases. this means more productive resources are now available, because capital is of strategic importance. When this happens. the entire production possibility curve is maladjusted which shows that the productive capacity of the economy is now greater than before and there  an all-round economic development.