What exactly do we mean by -business cycles”?

Bus me Cyclades are economy wide fluctuations in total national output, income, and employment, usually lasting for a period of 2 to 10 years. marked by wised spread expansion or contraction in most sectors of ,the economy. ‘ ‘

Typically economists divide business cycles into two main phases. mitt and Dt Fission. Pe and troughs mark the turning points of the cycles. Figure 2 S-2 shows the successive phases of the business cycle. The downturn of a business cycle is called a recession. A recreation is a recurring period of decline in total output, income. and employment, usually lasting from 6 months to a year and marked by widespread contractions in many sectors of the economy. A depression is a recession that is jot in. both scale and duration.

According to the organization which dates the beginning and’ end of business cycles. the National Bureau of Economic Research, the last U.S. recession occurred in 1990-1991. The economy hit the trough in March 1991 and then entered the expansion. When -the expansion continued unbroken through February 2000. it became the longest business expansion in recorded U.S. history. See “Websites” at the end of this chapter for further information.)

Although we call short-term fluctuations “cycles.” the actual pattern is irregular. No two business cycles are quite the same. No exact formula. such as might apply to the revolutions of the planets or of a pen. durum, c:an be used to predict the duration and timing of business cycles. Rather. in their irregularities. business cycles more closely resemble the fluctuations of the weather. Figure 2 S-3 shows the American business ,cycles throughout recent history. You can see that cycles ~e like mountain ranges. with different Lesley)s of hills and valleys. Some valleys are very deep and broad. as in the Great Depression; others are shallow and narrow. as in the recession of 1991.

While business cycles are not identical twins, they often have a familial similarity. If a reliable economic forecaster announces that a recession is about to arrive, are there any typical phenomena that you should expect to accompany the recession? The (01- lowing are a few of the customary characteristics of a recession: 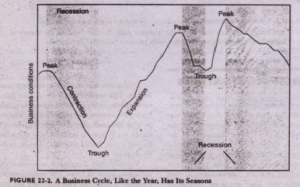 Business cycles are the irregular expansions and contraction in economic activity, (These ~re the actual monthly data on industrial production Cor a recent business-cycle period.) . 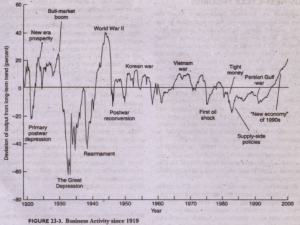 Industrial production has fluctuated irregularly around its long-run trend. Note how the long boom and information revolution of the ,19905 has given a pronounced upward tilt to the business cycle. Can you detect a more stable economy in recent years? (Source: Federal Reserve Board, deterrent by authors.)

• The demand for labor falls-first seen in a drop in the average workweek, followed by layoffs and higher unemployment.

• As output fails, inflation slows. As demand for crude materials declines, their prices tumble .Wages and prices of services are unlikely to decline,but they tend to rise less rapidly in economic downturns.

• Business profits fall sharply in recessions. In anticipation of this, common-stock prices usually fall as investors sniff the scent of a business’ downturn.However, because the demand for credit falls, interest rates generally also fall in recessions.

•Expansions are the mirror images of recessions, with each of the above factors operating in the opposite direction.