Short-run has been defined as a period of time sufficient to allow the firm to adjust its output by increasing or decreasing the amount of variable factors uf production, but during which fixed factors of production cannot be altered. Thus, in the short-run; the size and kind of plant can nul be changed, nor can new firms enter the industry. Assumptions. In explaining the equilibrium uf firm under perfect competition both in the short-run and long-rrn, wc assume that all firms are working under identical CIIst conditions, Given this assumption, we shall explain the equilibrium of one finn and this  xplanatiun will apply to all other firms in the industry. Identical cost conditions for the firms mean that average cost and marginal cost curves arc identical for all the firms. The entrepreneurs of all the firms are equally efficient. Further, we assume that the factors of production used by the diff~nt firms arc homogeneous and are available at given and constant prices, 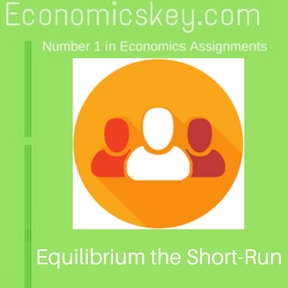 The above twin conditions of equilibrium ensure that profits have been maximiscd or losses minimiscd,
but they do not tell about the firm’s absolute piofit or have to bear fixed costs in the short-run even if they ,shut down. Only variable cost can be avoided by stopping production. Therefore, if a firm chooses to shut down in the short-run, even then it will have to bear lusses equal. to the fixed cost of production.
Hence, if the firm in operation call earn revenue more than the variable cost, it will not be prudent for the firm to close merely because it is not possible to cover fixed costs fully. Instead, the firm should keep operating in the short-run, if it call cover variable costs and make anything to cover a part of the fixed costs also. The saying ‘half a loaf is better than none’ is suggestive of prudent action, since it is better to obtain some revenue to meet a part of the fixed cost than 1I0ne at all. But if the price happens to be so low that the firm cannot cover even its variable cost.’, it should shut down in order to minimize the losses Hence, if losses arc greater than total fixed costs, i.e.. when revenue earned is even less than the total variable costs. the will shut down to avoid unnecessary losses.