EQUILIBRIUM OF FIRM: BY CURVES OF MARGINAL REVENUE AND MARGINAL COST

We know that a firm will be in equilibrium when it is earning maximum profits. We shall see presently
that for a firm, to make maximum profits. two conditions arc essential:
(i) Marginal Revenue = Marginal Cost. and (ii) MC curve cuts MR curve from below at the
equilibrium point. It is obvious that total profits can be increased by expanding output as long as the addition to the total revenue resulting from the sale of extra unit of output is greater than the addition io the total cost caused by producing an extra output. Now the addition to total revenue and total cost due to an extra unit of output are nothing else but marginal revenue and marginal cost respectively. Thus. a firm will go on expanding output as long as marginal revenue exceeds marginal cost of production. If. at any output. marginal revenue falls short of marginal cost.  if an additional unit of output adds less to total revenue than to total cost. the firm will contract output to avoid losses and thus increase its profits” The level of output when’ and  are equal is the profit

Hence, we conclude that firm’s profits at OM output are the maximum and that’ limn when laminar Ctlt libidinal This is one condition which is necessary but which is not sufficient for equilibrium.  the total profits earned by the firm in the equilibrium position The easily found. At output OM, the average cost iDM while the average revenue is QM. Therefore. the profit per unit will be equal to QD and the total profits will he equal to the rectangle DIRT. At an equilibrium position, the  curve  t cut the The condition that for a firm. 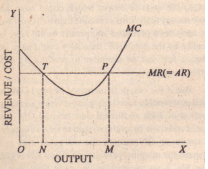