Another example of government interference comes when the government legislates a maximum price ceiling. This occurred in the United States in the 1970, and the results were sobering. We return to our analysis of the gasoline market to see how price ceilings function. Let’s set the scene. Suppose, as occurred in 1999-2000. “there is suddenly a sharp rise in oil
prices. This occurred because of reduced cartel supply and booming demand, but it might also come about because of political disturbances in the Middle East due to war or revolution. We.saw in Figure Sol the results of the 1973, 1979, and 2000 disturbances/ on the price of gasoline. Politicians, seeing the sudden jump in prices, rise to denounce the situation. They claim that consumers are being “group” by profiteering oil companies. bey worry that the rising prices threaten to ignite an
inflationary spiral in the cost of living. They fret about the impact of rising prices on the poor and elderly. They call upon the government to “do something.” In ” the face of rising prices. the U.S. government might be inclined to listen to these arguments and place a ceiling on oil.prices, as it did from 1973 to 1981. • What are the effects of such a ceiling? Suppose the initial price of gasoline is $1 a gallon. Then, because of a drastic cut in oil supply. the market price of gasoline n.es to $2 a gallon. Now consider the gasoline market after the supply shock. In Figure 4-12, the post shock equilibrium is given at point E. , Enter the government, which p~ a law setting the maximum price for gasohol at the old level of $1 a gallon. We can picture this legal maximum price as the ceiling· price line Catkin Figure 4-12. At the legal ceiling price, quantities supplied and demanded do not match. Consumers want- more gasoline than producers are willing to supply at the controlled price. This is show by the gap between J and K. This gap is so large. that before long the pumps run dry. Somebody will have to go without the desired gasoline. If the free market were allowed to operate, the market would clear with a price of $2 or
more; consumers would grumble but would willing they higher price rather than go without fuel. But the market cannot clear because it is against  the law for producers to charge a higher price. There follows a period of frustration and shortage-a game of musical cars in which somebody is left without 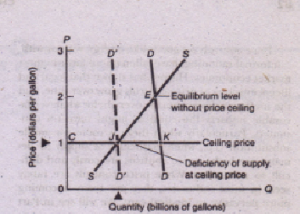 FIGURE “-12. Price Controls Produce Shortage
Without a legal price ceiling. price would “rise to E. At the ceiling price of $1. supply and demand do not balance. and shortages break out. Some method of rationing. formal or informal. is needed to allocate the short supply and bring the actual demand down to D’D’.

gasoline when the pump runs dry. The inadequate supply of gasoline must somehow be rationed. Initially. this may be done through a “first come, first served” approach, with or without limiting sales to each customer. Lines form, and much time has to be spent foraging for fuel. . Eventually. some kind of non price rationing mechanism evolves. For gasoline and other tolerable goods, the shortage is often managed by making people wait in line-rationing by the “queue.” Sometimes people who have privileged access to the good engage in black-market sales, which are illegal transactions above the regulated price. There is great waste as people spend valuable time-tying to secure their needs. Sometimes. governments design a more efficient system of non price rationing based on formal allocation or coupon rationing. Under coupon rationing, each customer must have a coupon as well as money to buy the goods in effect, there are two kinds of money. When rationing
is adopted and coupons are meted out according to “need,” shortages disappear because demand is limited by the allocation of the coupons.Just how do ration coupons change the supply-and demand picture? Clearly, the government must issue
just enough of them to lower the demand curve to D’D’ in.Figure 4-12. where supply and the new demand balance at the ceiling price.

Price controls on goods like energy, with or without formal rationing, have fallen out of favor in most market economies. History has shown that legal and illegal evasions of price controls grow over time. and the inefficiencies eventually overwhelm whatever favorable impacts the controls might have ‘on consumers. Particularly when there is room for ample
substitution (i.e., when elasticities of supply or demand are high), price controls are costly and difficult to administer. While price controls are rarely seen in most industries, they are today becoming more pervasive in medical care. We will see in Part,l that price controls in medicine are leading same kinds of efficient that were seen line a few decades ), There rant and proud sun (“,Ill never nervousness wishes«. III normal time-s. price lions the MSGID supplies. repellents to interfere demand, price longer fill the role 01 , Waste, efficient  and aggravation are certain companions of such interference.