One of the most profound results in all economics is that the allocation of resources by presently competitive markets is efficient. This important result assumes that markets are perfectly competitive and that there are no externalizes like pollution or imperfect information. However, even if the economy is efficient, this says nothing about the fairness of the distribution of income in competitive narcissus, In this section, we use a simplified example to illustrate the general principles underlying the efficiency, of competitive markets. Consider an idealized situation where all individuals are identical. Further assume: (a) Each person works at growing food. As people increase their work and cut back on their leisure hours. each additional hour of sweaty labor becomes increasingly tiresome. (b) Each extra unit of food consumed brings diminished marginal utility ‘(MU).’J (c) Be. cause food production takes place on fixed plots of land, by the law of diminishing returns each extra , minute of work brings less and less extra food Figure shows supply and demand for our simplified competitive economy.

When we sum horizontally the identical supply curves of our identical farmers, we get the upward-stepping Me curve. As we saw earlier in this chapter, the MC curve is also the industry’s supply curve, so the figure shows MC = ss. Also, the demand curve is the horizontal summation of the identical individuals’ marginal utility (or demand- for-food) curves; it is represented by the downward- stepping Mll = DD curve for food in Figure 8-11. 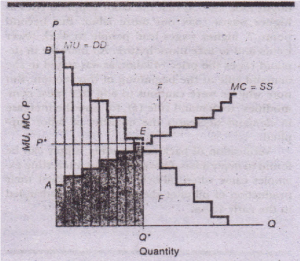 Many identical farmer-consumers bring their food to market. The upward-stepping Me = SS curve adds together the ‘.individual marginal cost curves, while the downward-stepping MU = DD curve represents the horizontal sum of con summer Valuations of food, At competitive market equilibrium E the marginal gain from the last unit of food equals the marginal cost (in terms of forgone leisure) required to produce the last unit of food at E.

The cost of producing food is shown by the dark gray slices, The light blue slices above the SS curve and below the price line add up to the “producer surplus.” The dark blue slices under DD and above the price line arc the “consumer surplus,” The sum of the consumer and producer, surpluses microeconomics surplus,” or the total gain from production in this industry, Ecotomic efficiency means that economic surplus {the total blue area} is maximized, Anv other output level would reduce the economic surplus, example, the light gra)’ area to the right of E shows the economic loss from producing too much food at FF.

The intersection of the SS and DD’ curves shows the competitive equilibrium for-food, At point E, tanners supply exactly what consumers want to purchase at the equilibrium market price. Each Pershing will be working up to the critical point where the declining marginal-utility-of-consuming-food curve intersects the rising marginal-cost-of-growing-food curve.

A careful analysis of the competitive equilibrium will show that it maximizes the economic surplus available in that industry, For this reason, it is economically efficient. At the competitive equilibrium at point E in Figure 8-11, the representative consumer will have higher utility or economic surplus than with an}’ other feasible allocation of resources,

Another way of seeing the efficiency of the competitive equilibrium is by comparing the economic effect of a small change from the equilibrium at E. As the following three-step process shows, if MU = P = Me. then the allocation is efficient.

1. P = MU, Consumers choose food purchases up to the amount where P = Mt:’. A~a result. everv person is gaining P utils of satisfaction from the last unit of food consumed, (Utils of satisfaction are measured in terms of the constant marginal utility of leisure, as discussed in footnote 2

2. P = Me. As producers, each person is supplying food up to the point where the price of food exactly equals the Me of the last unit of food supplied (the M Chere being the cost in terms of the forgone leisure needed to produce the last unit of food), The price then is the utils of leisure time satisfaction lost because of working to ~row· that last unit of food,

3_ Putting these two equations together, we see that MU = Me. This means that the utils gained from the last unit of food consumed exactly equal. the ‘ ‘leisure utils lost from the time needed to produce that last unit of food. It is exactly this addition- that the marginal gain to society from the last unit consumed equals the marginal cost to society of that last unit produced-which guarantees that a competitive equilibrium is efficient.