Effects of Changes in Trade

What would happen if there were changes in demand? For example, ifJapan has a recession, its demand for imports declines. As a result, the demand for American dollars would decrease. The result is . shown in Figure 29-4: The decline in purchases of American goods, services, and investments decreases the demand for dollars in the market. This change is represented by a leftward shift in the demand curve. The result will be a lower foreign exchange rate-that is, the dollar wilt depreciate and the yen will appreciate. At the lower exchange rate, the quantity of dollars supplied by Americans to the market will decrease because Japanese goods are now more expensive. Moreover, the quantity of dollars demanded by the Japanese will decline because of the recession. How much will exchange rates change? Just -enough so that” the supply and demand are again in balance. In the example shown in Figure 29-4, the dollar has depreciated from 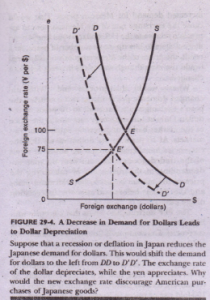 Let’s take a case involving the financial account. Suppose, as happened in 2000, that the-Federal Reserve tightens U.S. monetary policy because inflationary pressures have been increasing. This would make U.S. dollar assets more attractive than foreign assets as .dollar interest rates rise relative to’ interest rates on Japanese or European securities. As a result, the demand for dollars increases and the dollar appreciates. This is shown in Figure· 29-5.

More from Category: Exchange Rates and the International Financial System