In an earlier economists tried to peer to the future by looking at easily available data on items like money, boxcar loading. and steel production. ‘For example. a drop. in steel production was a sign that businesses had reduced purchases and that the economy would soon slow down. Eventually this was formalized by combining several different statistical into all “index of leading indicators.” While it is not infallible, the index does give an early and mechanical warning on whether the economy is heading up or down.

How are computer models of the economy constructed? Generally,modelers start with an analytically framework containing equations representing both aggregate demand and aggregate supply. Using the techniques of modern econometric, each equation is “fitted” to the historical data to obtain parameter estimates (such as’ the MPC, the slope of the investment demand function, etc.). In addition, at each state modelers use their own experience and judgment to assess whether the results are reasonable.

Under ordinary circumstances, the forecasts do a fairly good job of illuminating the road ahead. At other times, particularly when there are major policy changes, forecasting is a hazardous profession. Figure 2~5 shows the results of a recent survey of forecasts of real GDP (or, earlier, real GNP) by the major forecasting groups in the United States. For comparison purposes, the study used as a benchmark a “naive forecast in which the next year’s forecaster , output growth was simply equal to the current year’s growth rate. 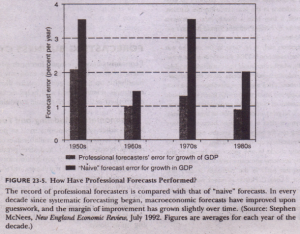 A3 the figure shows, professional forecasters systematically beat naive forecasts. In .the first two decades. the average forecast error among professionals was more than half error of naive ‘forecasts, while in the 1970s and 1980s, professionals’ errors’ dropped to less than half those of the naive approach. Another interesting feature shown in Figure 23-5 is that instability varies from period to period, with the 1950s and 1970s being relatively volatile while the 19605 and 1980s were tranquil periods. Clearly, forecasting is as much art as science in our uncertain world. Still, the strength of economic forecasting is that, year in and ‘Year out, professional forecasters provide more accurate forecasts than do those who use unsystematic or unscientific approaches.