Home » Production and Growth » ECONOMIC GROWTH AROUND THE WORLD

ECONOMIC GROWTH AROUND THE WORLD

As a starting point for our study of long-run growth, let’s look at the experiences of some of the world’s economies. Table 1 shows data on real GDP per person for thirteen countries. For each country, the data cover more than a century of history. The first and second columns of the table present the countries and time periods. (The time periods differ somewhat from country to country because of differences in data availability.) The third and fourth columns show estimates of real GDP per person about a century ago and for a recent year.

TABLE 1 The Variety of Growth Experiences 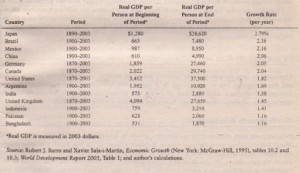 The Variety of Growth Experiences

The data on real GDP per person show that living standards vary widely from country to country Income per person in the United States, for instance, is about 7 times that in China and about 13 times that in India. The poorest countries have average levels of income that have not been seen in the developed world for many decades. The .typical citizen of India in 2003 had less real income as the typical resident of England in 1870. The typical person in Bangladesh in 2003 had about one-half the real income of a typical
American a century’ago The last column of the table shows each country’s growth rate. The growth rate measures how rapidly real GDP per person grew in the typical year. In the United States, for example, real GDP per person was $3,412 in 1870 and $37,500 in 2003. The growth rate was 1.82 percent per year. This means that if real

GDP per person, beginning at $3,412, were to increase by l.82 percent for each of 133 years, it WOUIU up at $37,500. Of course, real GDP per person did not actually rise exactly 1.82 percent every year: Some years it rose by more and other years by less. The growth rate of 1.82 percent per year ignores short run fluctuations around the long-run trend and represents an average rate of growth for real GDP per person over many years.
The countries in Table 1 are ordered by their growth rate from the most to the least rapid. Japan tops the list, with a growth rate of 2.79 percent per year. A hundred years ago, Japan was not a rich country. Japan’s average income was only somewhat higher than Mexico’S, and it was well behind Argentina’s. The standard of living in Japan in 1890 was lower than :11 India today because of its spectacular growth, Japan is now an economic superpower, with average income more than twice that of Mexico and Argentina and similar to Germany, Canada, and the United Kingdom. At the bottom of the list of countries are Bangladesh and Pakistan, which have experienced growth of only 1.16  percent per year over the century. As a result, the typical resident of these countries continues to live in abject poverty Because of differences in growth rates, the ranking of countries by income changes substantially over time. As we have seen, Japan is a country that has risen relative to others. One country that has fallen behind is the United Kingdom. In 1870, the United Kingdom was the richest country in the world, with average income about 20 percent higher than that of the United States and about twice that of Canada Today, average income in the United Kingdom is below the average income in its two former colonies  These data show that the world’s richest countries have no guarantee they will stay the richest and that the world’s poorest countries are not doomed forever to remain in poverty. But what explains these changes over time? Why do some countries zoom ahead while others lag behind? These are precisely the questions that we take up next.

More from Category: Production and Growth