The Malthusian Theory of Populations stated in effect that if people became prosperous (especially poorer sections), population would increase. In other words. an increase in the incomes of the poor would lead to an increase in their birth rates and, through the operation of positive checks, result in high death rates so that the growth of population would down. But the process of economic development, which has transformed agrarian economies into urban, industrialized and market-oriented economies, has led to the emergence of a new theory, viz., the Theory of Demographic Transition. The course of population growth since Malthus has been different from what he predicted. This course is more correctly described by this new theory. The theory of demographic transition brings out the relation between population growth and economic development.

The birth rates are high owing to universal and early manages, the influence of social beliefs and customs, religious arbutuses and, above all, from economic nieces It. This i beta e hi den start working early income and because they are reg – against old age. The birth  because the death rates are  have more children to fill up  high death rates. The death rates are high bad sanitary conditions, and a  preventive and curative medical birth rates and high death rates prevalent in  under-developed economy are well In accord with the Malthusian Theory of Population. In fact, high death rate is essential to prevent a population explosion which may be caused by high birth rates. The result is that population growth is not rapid, but this is achieved through suffering, disease and death. In an agrarian.

Let us now see how the situation is affected by the process of development and the social and economic changes which this development brings about. Economic development brings about an .  improvement in the economic condition of the people. The level of income, employment and productivity rises bringing about a rise in the level of living. The rural self-sufficiency is broken; the market is extended
and comes to dominate production. The economy becomes industrialized and urbanized; it uses more capital and capital equipment, i.e., elaborate tools and machinery. There are rapid changes in the techniques of production. The means of transport and  communication are extended and improved.

The striking trend in population in a developing economy is that death rates start declining. This follows an improvement in the standard of living, the availability of medical facilities and awareness of the benefits of smaller families. The food supply is more abundant and regular; there is greater security of life and property owing to improvement in the law and order situation. The medical innovations and the development of vaccines, antibiotics and insecticides and the improvement in sanitary conditions have eradicated many dangerous and fatal diseases. The public health measures have increasingly become more effective. The cumulative effect of all these developments is to reduce substantially the incidence of disease and death. There is. thus, an increasingly pervasive pattern of rapid decline in death rates in all developing economies.

But when a very high stage of economic development is reached as in the West, the birth rates fall too. There is deliberate limitation of the size of the family and this is facilitated by a widespread use of efficient contraceptive devices. The changing structure of production involves a declining importance of the family as a production unit, where women come to play an increasing role outside the home and’ where economic mobility can better be achieved with a small family. The children are considered more a burden than an asset. The economic advantages of a large family disappear and the fashion of having a small family first catches the higher strata of society but gradually infiltrates to the sections at the lower end of the economic scale and spreads eventually to the rural areas. 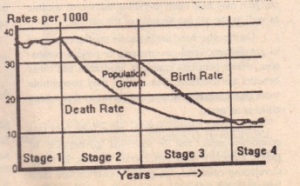 Thus’substantial economic  be a sufficient condition for a decline in but it is not today a necessary condition. relation between economic development an is even less certain. Small economic changes reduce birth rates. In many under-developed coon  social and economic changes that are now going are not likely to reduce fertility in the next two or three decades. The theory of demographic transition does not say what conditions are essential for a fertility decline and what precisely is the period during which this decline must take plate.

changes its form-oriented economy. &be a death rate declines. It continues to of better organisation and improving  knowledge and care. Somewhat later the birth rate begins to fall. The two rates follow a more or I parallel downward course with decline in birth rate lagging behind. Finally, as further reductions in the death rate become harder to attain, the birth rate again approaches equality with death rate and a more gradual rate of growth is .re-established, with, however, low risks of mortality and small family as the typical pattern. Mortality rates are now relatively stable from year to year and birth rates now responsive to voluntary decisions rather than to deeply imbedded customs may fluctuate from year to year.