Dynamic Theory of Pro
No I»rulil ill Slates Mary tate, This theory is associated with the name of the American economist, 1. B. Clark. He says that in a tatic world, where tile size of the population, the amount of capital, tile quantity and quality of human wants, the methods of production. technical knowledge, the organisation of business, etc., remain the same, profits tend to disappear under the force of competition. Profits represent the difference between selling price and cost. It is surplus above costs. But if competition works in a frictionless manner, the surplus will vanish. Wherever there is a surplus, production will increase, bringing down the price. That is how the surplus will disappear. “In the static state each factor secures what it produces, and since cost and selling prices are always equal, there can be no profits beyond wages for the routine work of supervision.” 3 In a stationary state everything is known and knowable. There is no risk and no uncertainty; hence n? profits. Profits Arise in World. But we are not living in a stationary state. Ours is a dynamic world and some changes are constantly taking place. The clever entrepreneur foresees these changes. He is a pioneer. Somehow by invention or otherwise he lowers 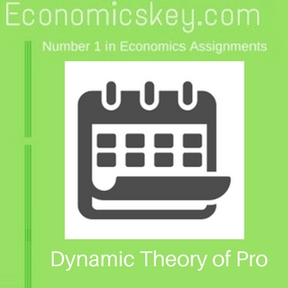 the cost and makes profits. The changing world . offers limitless opportunities to the farsighted, daring and clever entrepreneurs to make profits by turning the facts of the situation in their favour. It is only because the world is dynamic that it is possible for them to keep the lead and reap the profits. That the world is dynamic is due to two sets of factors: (a) internal and (b) external. In other words, there are certain changes which the entrepreneur himself brings about such as innovations and there are other changes which arc brought about by external forces. The external changes are of two kinds; (a) regular changes like trade fluctuations which affect all profits and (b) irregular as breaking out of fire, earthquake, floods, strikes, changes in tastes, changes due to government policies, war, etc. Thus, profits arise out of changes. In the static world, there is no change; hence no profits. In an economy. where nothing changes, there can be no profit.

Prof. Knight. however, is of the opinion that only those changes. which cannot be foreseen and which cannot be provided for in advance, will yield profits and not others. He says, “It cannot, then, be change, which is the cause of profit, since if lite law of change is known, as in fact is largely the case, no profits can arise. Change may cause a situation out of which profit will be made, if it brings about ignorance of the future.” 4 Thus, it is ignorance of the future or uncertainty, and not necessarily change, which, according to the cause of profit.