Home » Efficiency VS Equality The Big Trade-off » Distribution of Wealth

One major source of the inequality of income is inequality of ownership of wealth. which is the net ownership of financial claims and tangible property. Those who are fabulously wealthy-whether because of inheritance, skill, or luck-enjoy incomes far above the amount earned by the average household. Those without wealth begin with an income handicap.

In market economies, wealth is much more unequally distributed than is income, as Figure 19-2(b) shows. In the United States, 1 percent of the households own almost’ 40 percent of all assets. Studies by New York University’s Edward Wolff show that the distribution of wealth has become much more unequal. Because of the booming stock market, the share of wealth held by the top 1 percent of people has doubled 0″1″” the two decades.

The vast have spurred critics of taxation of Revolutionaries have the state of great. In recent years, a more end has muted the call for redistribution of wealth, and some have called for the abolition of inheritance taxes, which they call “death taxes ” Economists recognize that heavy taxation of property income and wealth may dull the incentives for saving and may reduce a nation’s capital formation. Particularly in a world ofopen borders, countries with high tax rates on wealth may find that the wealth has fled across the borders to tax havens or Swiss bank accounts. 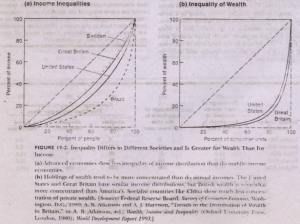