When commercial banks are short of reserves, they are allowed to borrow from the Federal Reserve ‘Banks. Their loans ‘were included under the asset heading “Loans and acceptances” in the Fed balance sheet in Table 26-1. These loans are called borrowed reserves. When borrowed reserves are growing, the banks are borrowing from the Fed, thereby increasing total bank reserves (borrowed plus borrowed reserves). Conversely, a drop in borrowed reserves promotes a contraction in total bank reserves. In the early years, the discount window was the primary vehicle for providing reserves to the banking system. As financial markets developed and the role of monetary policy was better understood. the Fed  as turned to open-market operations as the primary tool for adjusting the overall level of reserves. .Today, the discount window is used primarily to buffer the day-to-day fluctuations in member-bank reserves. Because banks can go to the discount window when there are unanticipated fluctuations in required reserves, the extent of short-term volatility in interest rates is reduced. 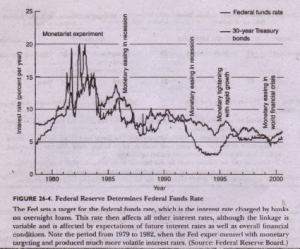