We begin our examination of the general level by examining the factors underlying the demand for labor. The basic tools were provided in the last chapter. where we saw that the demand for a factor of production reflects the marginal productivity of that input.·
Figure 13-2 illustrates the. marginal-productivity theory. At a given time and with a given state of technology. there exists a relationship ‘between the quantity oflabor inputs and the amount of output.

By the law of diminishing returns, each additional unit of labor input will add a smaller and smaller slab of output. In the example shown in Figure 1~2, at 10 units of labor, the competitively determined general wage level will be $20 per unit. But probe deeper and ask what lies behind the marginal product. To begin with, the marginal productivity oflabor Willrise if workers have more or better capital goods o work with. Compare the productivityof a ditchdigger using a bulldozer with that of a similar digger using a hand shovel, or the communications capabilities of medieval messengers with modern e-mail. Second, marginal productivity of better trained or better-educated workers will generally be higher than that of workers with less “human capital.”These reasons explain why wages and living standards have risen so much over the last century.

Wage are high in the United States and other industrial countries because these nations have accumulated substantial capital stocks: dense networks of roads, rails, and communications; substantial amounts of plant and equipment for each worker; and adequate inventories of spare parts. Even more important are the vast improvements in technologies compared to those of an earlier era. Over the last century we have seen light bulbs replace oil lamps, airplanes replace horses, xerography replace quill and ink, computers replace abacuses, and Internet commerce invade traditional ways of doing business. Just imagine how productive the. average American would be today with the technologies of 1900.

The quality of labor inputs is another factor determining the general wage level. By any measure literacy, education, or training-the U.S. labor force of 2000 is vastly superior to the one of 1900. Years of education are necessary to produce an engineer capable of designing precision equipment. A decade of training must precede the ability to perform successful brain surgery. Overall, the. proportion of all adults who have completed college rose from 6 percent in 1950 to 24 percent in 1998. Such accumulations of human capital provide a substantial boost to the productivity of labor. 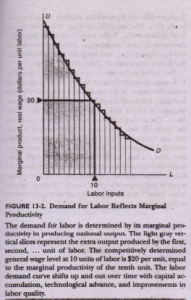