Game theory has wide: applications in political science, military strategy. and evolutionary biology. A particularly dangerous game with an inefficient non cooperative equilibrium. seen many times in history, is the arms ma. Say you are superpower A facing.hostile superpower R, or anticipating the rise of superpower C. You want to make sure that you have sufficient weapons to deter aggression. Because you are uncertain about your opponent’s intentions, you play it safe by having a modest weapons superiority over your opponent. Your generals tell you that this is just prudent military policy.

Now put yourself in the shoes of R, which is watching you engage in a military buildup. R does not know your intentions. Its generals also counsel a strategy of prudent superiority, So A wants 10 percent more bombs than R, and R wants 10 percent more bombs than A This triggers an explosive arms race. Do not think for a moment that this is a fanciful example. The non cooperative arms race between the United States and the Soviet Union over the 1945- 1991 period led to massive military spending and an arsenal of almost 100,000 nuclear warheads, many of which are still drifting around the remnants of the Soviet empire.

A cooperative solution might have avoided the risks of nuclear war as well as the heavy burden of defense spending for almost five decades. Some people fear that easy availability of guns in America may lead to a domestic arms race as people acquire guns to defend themselves against other people’s guns. These situations call for cooperative solutions in which the parties get together to reduce the -armaments. Arms-control agreements move the out come from an inefficient non cooperative equilibrium to a  less inefficient cooperative outcome. In doing so, they can increase the and welfare of all participants. 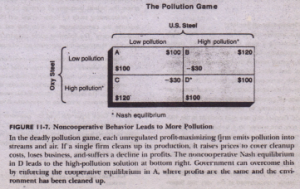