The technology and cost structure of an industry help determine how many firms that industry can support and how big they will be. The key is whether there are economies of scale in an industry. If there are economies of scale, a firm can decrease its average costs by expanding its output, at least up to a point. That means bigger firms will have a cost advantage over smaller firms.

When economies of scale prevail, one or a few will expand their outputs to the point where they produce most of the industry’s total output. The industry then becomes imperfectly competitive. Perhaps a single monopolist will dominate the industry; , a more likely outcome is that a few large sellers will control most of the industry’s output; or there might, be a large number of firms, each with slightly different products. Whatever the outcome; we must inevitably find some kind of imperfect competition instead ‘of the atomic perfect competition of price-taking firms. Many industries enjoy increasing returns to scale. 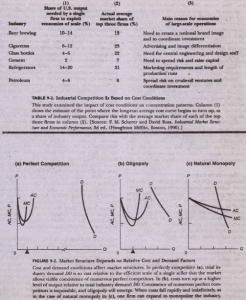 Numerous detailed econometric and engineering studies confirm that many non agricultural industries , show declining average long-run costs. For example, , Table 9-2 shows the results of one study of six U.S. industries. It suggests that in many industries the point of minimum average cost occurs at a large fraction of industry ‘output-e-I 0 or 20 or even 50 percent.

These industries will’ tend to be oligopolistic, since, they can support only a few large producers. To understand further how costs may determine market structure, let’s look at a case which is favorable for perfect competition. Figure 9-2(a) shows an industry where the ‘point of minimum average cost is reached at a relatively low level of output. Any firm which tries to’ expand its output beyond this point will find its costs rapidly rising. As a result, this industry can support the large .number ‘of efficiently operating firms that are needed for perfect competition.

Figure 9-2(a) illustrates the cost curves in the perfectly competitive farm industry. Now consider Figure 9-2(b), which shows an industry where firms enjoy increasing returns to scale’ up to a point, above which the scale economies are exhausted and average costs begin to increase. However, the AC curve is relatively Hat and does not turn up soon enough to avoid the breakdown of perfect competition; that is, the limited demand curve of the industry allows only a small number of firms to coexist at the point of minimum average cost. Such ‘a cost structure will tend to lead to oligopoly. Most manufacturing industries in the United States-including steel, automobiles, cement: and oil-have a demand and cost structure similar to the one in Figure 9-2(b).

A final important case is natural monopoly. Autun! monopoly is a market in which the industry output can be efficiently produced only by a single firm. This occurs when the technology exhibits economies of scale over a range of output that is as large as the entire demand. Figure 9-2(c) shows the cost curves of a natural monopolist. The technology has perpetual increasing returns to scale, and average and marginal costs therefore fall forever. As output grows,the firm can charge lower and lower prices and still make a profit, since its average cost is falling. 59 peaceful competitive coexistence of thousands of perfect competitors will be quite impossible because one large firm is so much more efficient than a collection of small firms.