Tile cost of living depends on the collection of goods and services consumed by the household. The standard of living consists of the various combination of goods yielding equal satisfaction. Such combinations can be represented by points on the same indifference  curve.If the combinations of goods purchased in two successive years arc plotted on the indifference curve, it can be shown whether the standard of   has risen or fallen according a, the most preferable combination is on a higher 01 lower indie Tancred curve touching the respective price lines.

In the field of taxation. too. the indifference curve technique can be usefully employed. For instance. it can help us to find out whether a direct boxlike income- tax will be better or not than indirect taxes like sales tax or excise duty. ROM the point of dew of an individual (who maybe considered a Antarctica of a group of tax-payers), will it be better to pay Rs. 100 as income-tax or Rs. 100 in the all excise duty? Excise duly is hound to raise the ) ice of the commodity seedy is CK (OK is double). The consumer is in equilibrium at P and he will, therefore, buy OF quantity of wheat and the amount of subsidy is An. lie spends AC on wheat, but in the absence of the subsidy, he would have spent BC. AU would be the cost to the Government (the vertical distance between the two price lines). The benefit 10 the consumer is CD. The price line without subsidy, i.e., CG has moved too the right and becomes 1)11 so as to be tangent to the indifference curve. This amounts to an increase in the money income uf the consumer. It will he seen than CO is less than All, i.e., the amount of the subsidy. Hence, we may conclude that the cost of the subsidy to the government is greater than the money equiv a. lent of the gain to the consumer. 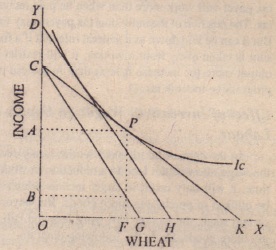