Home » The Costs of Production » COST CURVES AND THEIR SHAPES

COST CURVES AND THEIR SHAPES

Just as in previous chapters we found graphs of supply and demand useful when analyzing the behavior of markets, we will find graphs of average and marginal cost useful when analyzing the behavior of firms. Figure 4 graphs Thelma’s costs using the data from Table 2. The horizontal axis measures the quantity the firm produces, and the vertical axis measures marginal and average costs. The graph shows four curves: average total cost (ATC), average fixed cost (AFC), average variable cost (AVC), and marginal cost (MC).

Rising Marginal Cost Thirsty Thelma’s marginal cost rises with the quantity of output produced. This reflects the property of diminishing marginal product. When Thelma produces a small quantity of lemonade, she has few workers, and much of her equipment is not used. Because she can easily put these idle resources to use, the marginal product of an extra worker is large, and the marginal cost of an extra glass of lemonade is small.

U-Shaped Average Total Cost Thirsty Thelma’s average-total-cost curve is V-shaped, as shown in Figure t!. To understand why, remember that average total cost is the sum of average fixed cost and average variable cost. Average fixed cost always declines as output rises because the fixed cost is getting spread over a larger number of units. Average variable cost typically rises as output increases because of diminishing marginal product. 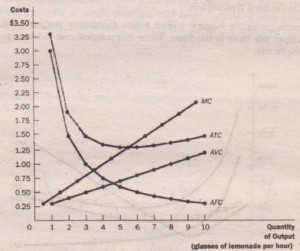