According to this theory the additional population growth is treated in two ways (1) as an asset and (ii) as a liability ‘a’ ‘b’ & ‘c’ are utility derived from additional children (I) ‘a’ is the amount of utility or satisfaction from the possession of an additional child, this remains constant whether to a ‘rich’ person or a poor person.

In urban areas, the people to a greater extent educated, and have a nuclear family concept in which both wife and husband is employed. If such a family wants to have an additional child, then they have to look into the concept of cost to develop the child. It is one of the basic objective of human psychology, that is. if you have a child, then he should be provided best food, best clothing and best education. The aim is to develop the child, rather than an asset or utility aspect. Due to additional child a family may undergo financial problems. It can be divided into two types of costs (a) Direct cost (b) Indirect cost. 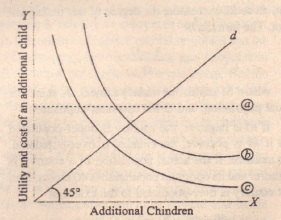 (a) Direct cost is the amount of money incurred to look after the child (to develop the child-food, education etc) and when the woman is on maternity leave. She may have to Jose certain amount of money (In case if maternity leave is not available, leave without pay) is to be taken. (b) Indirect cost is the amount of freedom or loss of entertainment due additional child to the family. A family with more number of children may not be able to go for entertainment etc.

Though the theory neglects certain Sociology, cultural aspect but to a greater extent economic aspect, play an important role in the population growth theory. This theory is found to be correct in developing countries. Specially dual economies. where a majority of the people are living in rural areas and smaller number in unbar areas. Rural people donor have enough money to look after their families, they try to have additional children to bring in more income. Specially where landless labors or caused workers, even when both wife and husband is employed, the income may not be sufficient. The families may not be having any future income in the form of pension. insurance policies or other securities. Hence they feel that additional children may help them in getting additional income as well as the old age-security of the parents

Population policy makers must look into this economics aspect and the so called ‘governance’ of public authority must concentrate on this. In many developing countries, the governments declare their social security measure only on a temporary bases, This they may announce to obtain the votes to get elected.