Thus. two conditions must be satisfied for a consumer tq attain an equilibrium:

(I) The price line should be tangent to an indifference curve or MRS of one c commodity for another should be equal to their relative pries. This is no doubt a necessary condition. but not a sufficient condition of equilibrium. For attaining equilibrium another condition must also be satisfied as under: 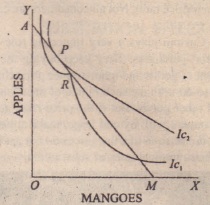 Conclusion. Thus. the point of consumer’s equilibrium or of maximum satisfaction may be defined by the condition that the marginal rate of substitution between any pair of two commodities will be equal to the ratio of their prices. or (what can be deduced from it), the marginal rate of substitution of money for any commodity is equal to the price of the commodity. That is. the slope of the price line- and that of the indifference curve must coincide (the fonner is a tangent to the latter). In other words, there must be a coincidence between the rate at which the consumer is  substitute X for Y (as depicted in the indifference curve) and the rate at which he (‘;111 substitute (as indicatedby the price line). If these two ratios arc not equal, it Will be possible, by changing the combinationof X and Y. to reach a still higher level of satisfaction.