CONCLUSION: THE PREVALENCE OF MONOPOLY

This chapter has discussed the behavior of firms that have control over the prices they charge. We have seen that these firms behave very differently from the competitive firms studied in the previous chapter. Table 2 summarizes some of the key similarities and differences between competitive and monopoly markets.

From the standpoint of public policy, a crucial result is that monopolists produce less than the socially efficient quantity and charge prices above marginal cost. As a result, they cause deadweight losses. In some cases, these inefficiencies can be mitigated through price discrimination by the monopolist, but other times, they call for policymakers to take an active role. How ‘prevalent are the problems of monopoly? There are two answers to this question.

In one sense, monopolies are common: Most firms have some control over’ the prices they charge. They are charge the market price for their goods because their goods are. not exactly the same as those offered by other firms. A Fortuitous is .not the same as a Toyota Camry. Ben and Jerry’s ice cream is not ‘the same as Breyer).Each of these’downward sloping demand curve, which gives each producer some degree of monopoly power.

Yet firms with substantial monopoly power are rare. Few goods are truly unique. Most have substitutes that, even if not exactly the same, are similar. Ben arrd Jerry can raise the price of their ice cream a little without losing all their sales, but if they raise it very much, sales will fall substantially as their customers switch to another brand. 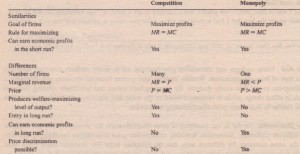