The Indian Planning Commission decided in September 1977 to introduce the rolling plan concept with effective from April I, 1978 with a view to ensuring greater flexibility and realism in planning. 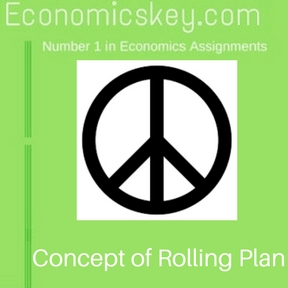 It was felt that the past pattern proved to be vulnerable to changes in the domestic and international economies and did not adequately provide for the inevitable fluctuations in agricultural output . Under the rolling plan concept. a five-year plan i formulated as before. but it is revised level year of the performance of the various sectors economy and availability of resources. That is. there dual operational plan for each year with a fresh perspective. Thus, there is a five-year plan in continuous existence. being reviewed and extended year by year.

But it would be unfortunate if long-term perspectives are sacrificed on gerunds of expediency and excessive reliance placed on short-term changes in programmed. The complexities of the situation and structural problems make a clear tense of direction imperative. It is equally true that ad choc cuts in planned investment can disturb the basic

plan balances. In fact, the critics of the Rolling Plan complain that it may lead to no plan at all. They argue that a rolling perspective plan cannot take care of heavy industries with very long gestation periods. But it is not true that a roll  perspective  plan cannot plan for heavy industries at all. Only. the attainment of the targets in their case will depend upon the prevailing circumstances in anyone year.

Some people hold the view that it would usher in an era of “realistic and purposeful” planning in the country in the period to come. It is said that the rolling plan concept is eminently practical. It is considered that the rolling plan concept would make the government action-oriented. as accountability would increase when the yardstick for judging the results is short-term. It might help the administration cut bureaucratic red tape, and corruption involved in clearing industrial licences, as the people are impatient for results.