The degree of imperfect competition’ in a market is influenced not just by the number and size of firms but by their behavior.  only a few firms operate in a market, they see what their rivals are doing and react. For example, if there are two airlines operating along the same route and one raises its fare, the other must decide whether ‘to match the increase or to stay with ~e , undercutting its rival. Strategic interaction is a term that describes how each firm’s businesss trategy depends upon its rivals’ business behavior.

When there are only a small number of firms in a market, they have a choice between cooperative and noncooperation behavior. Firms act non cooperatively when they act on their own without any explicit or implicit agreement with other firms. That’s what produces price wars. Finns operate in a’ cooperative mode when they try to minimize competition. When firms in an oligopoly actively cooperate with each other, they engage . This term denotes a situation in which two or more firms jointly set their prices or outputs, divide the market among themselves, or make other business decisions jointly. During the early years of American .capitalism, before the passage of effective antitrust laws, oligopolists often merged or formed a trust or cartel .(recall Chapter 9’s discussion of trusts, page ISO). A cartel is an organization of independent firms, producing similar products, that work together to raise prices and restrict output. Today, with only a few exceptions, it is strictly illegal in the United States and most other market economies for companies to collude by jointly setting prices or dividing markets. (The antitrust laws pertaining to such behavior are discussed in Chapter 17.)

Nonetheless, firms are often tempted to engage in tacit collusion, which occurs when they refrain from competition without explicit agreements. When firms tacitly collude, they often quote identical high prices, pushing up profits and decreasing the risk of doing business. A recent examination found that about 9 percent of major corporations have admitted to or been convicted of illegal price fixing. In recent years, makers of infant formula, scouring pads, and kosher Passover eroducts have been investigated for price fixing, while private universities, art dealers, the airlines, and the telephone industry have been accused of collusive behavior. The rewards of successful collusion can be great. Imagine a four-firm industry-call the firms A, B, C, and D-where all the rivals have tired of ruinous price wars.

They tacitly agree to charge the same price and not undercut each other. The firms hope to form a coDusift oligopoly by finding the price which maximizes their joint profits. Figure 10-2 illustrates oligopolist A’s situation. A’s demand curve, DAD A, is drawn assuming that the other firms all following. 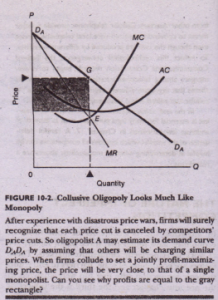 Each firm’s demand curve will have the same elasticity as the industry’s DD curve. Firm A will get one fourth of the shared market as long as all firms charge the same price. The maximum-profit equilibrium for the collusive oligopolist is shown in Figure 10-2at poin t E, the .. intersection of the firm’s Meand MR curves. Here, the appropriate demand curve is DADA., which recognizes that the other firms will charge the same price as A. The optimal price for the collusive oligopolist is shown at point G on DADA’ just above point E. This price is identical to the monopoly price; it is well above marginal cost and earns the colluding
oligopolists a handsome monopoly profit.

When oligopolists can collude to maximize their joint profits, taking into account their mutual interdependence , the will produce the monopoly output and price and earn the monopoly profit. Although many oligopolists would be delighted to earn such high profits, in reality many obstacles hinder effective collusion, First, collusion is illegal. Second, firms may “cheat” on the agreement by cutting their price to selected customers, thereby increasing their market share. Clandestine price cutting is particularly likely in markets. where prices are secret, where goods are differentiated, where there is more than a handful of firms, or where the technology is changing rapidly. Third, the growth of international trade means that many companies face intensive competition from foreign firms as well as domestic companies.

Indeed, experience shows that running a successful cartel is a difficult business, whether the collusion is explicit or tacit. One long-running thriller in this area is the tory of the international oil cartel known as the Organization of Petroleum Exporting Countries or OPEC. OPEC is an international organization’ .hich sets production quotas for its members. Its tated goal is “to secure fair and stable prices for oetroleum producers; an efficient, economic and regular supply of petroleum to consuming nations; and a fair return on capital to those investing in e industry,” Its critics claim it is really a collusive onopolist attempting to maximize the profits of. reducing countries. OPEC became a household name from 1973 to i5, when it reduced production sharply and oil ices skyrocketed. But a successful cartel requires t members seta low production quota and main discipline.

Every few years price competition , OUL when some OPEC countries ignore their tas. This happened in a spectacular way in 1986, en Saudi Arabia drove oil prices from S28 per bar down to below $10. It is particularly hard to ene a cartel among parties that hate each other or ren-s-as with Iraq, Iran, and Kuwait-are fighting. real wars as well as price wars. Another problem faced by OPEC is that it production quotas rather than prices. This may d to high levels of price volatility when demand is predictable and highly price-inelastic. In the 999-2000 period, for example, OPEC overestimated demand and oil prices fell to around SIO per rrel. OPEC then cut its production quotas; but because demand rose more sharply than had been fore- _C4I5t, oil prices shot up to over $30 per barrel in early 2000, leading to yet another squabble among OPEC members.

The airline industry is another example ofa market with a history of repeated-s-and failed-attempts at collusion, It would seem a natural candidate for collusion. There are only a ‘few major airlines, and on many routes there are only one or two rivals. But just look at the quote at the beginning of the chapter, an apparent attempt at collusion. Since then, Braniff has gone bankrupt twice, and American Airlines and other airlines, while successful in the’ mid- 1980 s, lost more than $10 billion in the early 19905.

If collusion existed, it clearly did not make the industry profitable. ‘Indeed, the evidence shows that  the only time an airline can charge supernormal . fares is when it has a near-monopoly on all flights to a city.