Home » Application The Costs of Taxation » Changes in Welfare

Application The Costs of Taxation

Figure 3 How a Tax Affects Welfare 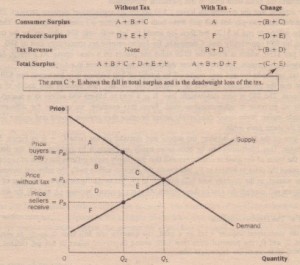 The change in total welfare includes the change in consumer surplus (which IS negative), the change in producer surplus (which is also negative), and the change in tax revenue (which is positive) When we add these three pieces together, we find that total surplus in the market falls by the area C + E. Thus, the losses to buyers and sellers from a tax exceed the revenue raised by the government. The fall in total surplus that results when a tax (or some other policy) distorts a market outcome is called the dead weight loss. The area C + E measures the size of the dead weight loss. To understand why taxes impose dead weight losses, recall one of the Ten Principles of Economics in Chapter 1: People respond to incentives. In Chapter 7, we saw that markets normally allocate scarce resources  efficiently. That is, the of supply and demand maximizes the total surplus of buyers and sellers in a market When a tax raises the price to buyers and lowers the price to sellers however, it. gives buyers an incentive to consume less and seller an incentive to produce less than they would in the absence of the tax. As buyers and sellers respond to these incentives, the size of the market shrinks below its optimum (as shown in the figure by the movement from Q to Q0. Thus, because taxes distort incentives they cause markets to allocate resources, inefficiently.

More from Category: Application The Costs of Taxation