THE INCREASING OPENNESS OF THE U.S. ECONOMY

Perhaps the most dramatic change in ~e US. economy over the past five decades has been the increasing importance of international trade and (mane. This change is illustrated in Figure 1, which shows the total value of goods and services exported to other countries and imported from other countries expressed as percentage of gross domestic product. Tn the 1950s, imports and exports of goods and service were typically between 4 and 5 percent of GDP. In recent years, exports have been about twice that level, with imports about three times as high.

Figure 1 The Internationalization of the U.S. Economy 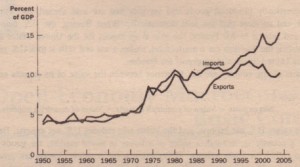 This increase in international trade is partly due to improvements in transportation. In 1950, the average merchant ship carried less than 10,000 tons of cargo; today, many ships carry more than 100,000 tons. The long-distance jet was introduced in 1958, and the wide-body jet in 1967, making air transport far cheaper than it had been. Because of these developments, goods that once had to be produced locally can now be traded around the world. Cut flowers, for instance, are now grown in Israel and flown to the United States to be sold. Fresh fruits and vegetables that can grow only in summer can now be consumed in winter as well because they can be shipped to the United States from countries in the Southern Hemisphere.

The increase in international trade has also been influenced by advances in telecommunications 1, which have allowed businesses to reach overseas customers more easily. For example, the first transatlantic telephone cable was not laid until 1956. As recently as 1966, the technology allowed only 138 simultaneous conversations between North America and Europe. Today, communications satellites permit more than 1 million conversations to occur at the same time.

Technological progress has also fostered international trade by changing the kinds of goods that economies produce. When bulky raw materials (such as steel) and perishable goods (such as foodstuffs) were a large part of the world’s output, transporting goods was often costly and sometimes impossible. By contrast, goods produced with modem technology are often light and easy to transport. Consumer electronics, for instance, have low weight for every dollar of value, which makes them easy to produce in one country and sell in another. An even more extreme example is the film industry. Once a studio in
Hollywood makes a movie, it can send copies of the film around the world at almost zero cost. And indeed, movies are a major export of the United States.

The government’s trade policies have also been a factor in increasing international trade. As we discussed earlier in this book, economists have long believed that free trade between countries is mutually beneficial. Over time, most policy makers around the world have come to accept these conclusions.