Capital-output Ratio meaning. Apart from the ratio of tion to the aggregate national income the r  output depend upon the couple outpct  capital-output ratio may be defined as the relationship of investment JO a given cc n my or in  given time I riod 10 the r I of indu: try f r   millar tin put ratio thu dcemu ..  ru are. ult r a e-rvcn than a hi~ r capital-ou  tal-output ra 10 (If 3 : I lJtJld I an, in Indian rupees.  that    capital investment (If R , 3 re ults in the addition (If output  orth Re. I. I Icncc. given the output.  mailer capital investment would be  needed if the  capital-output ratio is lower than when it is higher. Factors Determining Capital-output Ratio.  It is difficult to estimate the  capital-output ratio for an economy. The productivity of capital depends upon  many factors such as the degree of technological  development  a .sociated with capital investment. the efficiency of handling new types of equipment. the quality  of managerial and organizational skill.  he existence  and the extent of the utilization of economic overheads and the pattern and rate of investment. For instance.  the higher the  proportion of investment devoted to  3. Rosen, 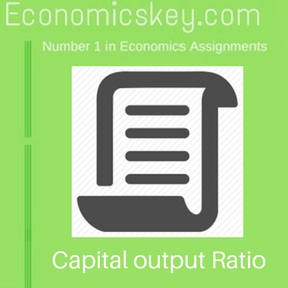 Georgo-lnduslriai Changes ill India. 1959. p. 37.  the production of direct commodities, the  ower the  capital-output ratio: and higher the proportion of investment devoted to public utilities. i.e.. ccoriomic and soeial overheads, the   igher shall be the capital-output ratio. and vice versa. Higher the investment devoted  to heavy industry, the higher will be the capitaloutput ratio. and vice versa. Higher the rate of investment  and greater the technological progress, the lower will be the capital- utput   atio. TIle capital-output ratio also varies with the prices of inputs.  \Vh)’ High in Under-developed Countries. It is agreed that capital-  utput ratio in under-developed countries is generally higher. i.e.. the capital is less  productive in them than in developed countries. This is  o because there is a relative inefficiency of the industries  which produce capital goods. There is the greater wastage of capital in the process   f production due to low level of technical knowledge and there is the scarcity of economic overheads. Besides. owing  to indivisibilitics.  ertain kinds of investment arc bound  to be initially under-utilized, As development proceeds, naturally the pattern of demand will ‘~hift   owards the more capital intensive industries.  e timates have been made of capital ir poor countrie . A group of experts United auon used a   atio ranging 5 : I The Second Five-Year Plan of  assumed an a crage capital-output ratio of 23 : z : IIn the First Five-Year Plan. Kurihara has n th t in most under developed countries the  ratJo is of the order of 5 : 1. Singer in his model of ec lie development assumed a ratio of 6    I in the non-agncultur. . r~ctor and 4 : I in the agricultural sector and Rockin-Rodan estimates that.