BETWEEN MONOPOLY AND PERFECT COMPETITION

The previous two chapters analyzed markets with many competitive firms and markets with a single monopoly firm. In Chapter 14, we saw that the price in a perfectly competitive market always equals the. marginal cost of production. We also saw that, in the long run, entry and exit drive economic profit to zero, so the price also equals average total cost.

The cases of perfect competition and monopoly illustrate some important ideas about how markets work.
Most ~ts in the economy, however, include elements of both these cases and, therefore, are not
completely scribed by either of them. The typical Finnish the economy faces competition, but the competition is not so rigorous as to Jake ‘the firm exactly as described by the price-taking firm analyzed in Chapter 14. The typical firm also has so~ degree of market power, but its market is not so great that  can be exactly as described by the monopoly firm analyzed in’ Chapter 15. In this chapter and the next, we turn our attention to how. firms behave in imperfectly competitive markets.

The first type of imperfectly’ competitive market is an oligopoly, which. is a market with only Ia few sellers, each offering a product similar ‘or identical’ to the others. The market for tennis balls is one , example, but there are many others, Economists measure a market’s domination by- a small number of firms with a statistic called the concentration ratio, which is the percentage of total output -in the market supplied by the four largest fums. In the U.S. economy, most industries have a four-firm concentration ratio under 5,9 percent. By contrast, highly concentrated industries include breakfast cereal. (which has a concentration ratioof 83 percent), aircraft manufacturing (85 percent), electric light bulbs (89 percent), household laundry equipment (90 percent), and’ cigarettes (99 Percent). These industries are best described as oligopolies. 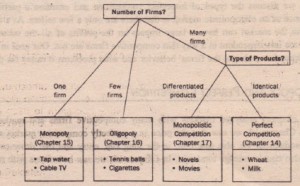 Reality, of course, is never as clear-cut as theory. In some cases, you may find it hard to decide what structure best describes a market. There is, for instance, no .magic number that separates few from many when counting the number of firms. (Do the approximately dozen companies that now sell cars in the United States make this market an oligopoly or more competitive? The answer is open to debate.) Similarly, there is no sure way, to determine when products are differentiated and when they are identical.
(Are different brands of milk really the same? Again, the answer is debatable.) When analyzing actual markets, economists have to keep in mind the lessons learned from’ studying all types of market structure and apply each lesson as it seems appropriate.