Incumbent should also satisfy what we may call the lance payments criterion. Alternative types of instinct cant expenditures will have different effects  country’s export capacity and import requirement.One inconstant project may be more export-creating the n another and one project may he more import-requiring than another. Knowing that under-developed countries arc particularly prone to
balance of payments difficulties. investments should he directed, as far  practice to those projects that will reduce imports or increase exports, other things being equal 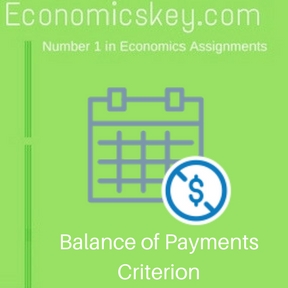 Some industrious brave a long gestation period. while for some others there is a short time-lag between incurring the investment expenditure and the – reaping of fruits. While comparing the benefit; of the extra output with the costs. the cost of time never be forgotten. Unless eventual benefits are out outstandingly great. priority should be given to those industries  production technique which have a relatively short time-lag. Mr. Hick ha called such industries (luck manicurist ). In a developing economy. with a high inflationary potential and a need for a rapid rise in the living standard. industries which have a high “fruition co-efficient (i.e  a high ratio between output and investment) and also a short fruition should generally be preferred, This point is particularly important when one is comparing the two ways of producing the same result. Thus, extra agricultural output may be secured by major irrigation schemes or minor irrigation schemes. By and large, the major irrigation schemes should be regarded as less desirable than the minor irrigation schemes. because of the time-lags and high capital costs of the former unless. the eventual benefits are outstandingly great.

Further, there is a problem of choosing between labor-intensive industries or labor-intensive methods and capital-intensive industries or capital-intensive techniques. Since in poor under-developed countries. there is a chronic unemployment and the
price of lab our is low compared with the price of capital, a relatively high ratio layabout to capital should. as a rule be favored. In general. where market opportunities exist. and technological restrains are not a problem, the most efficient use of resources in the less developed countries will tend to favor intensiveness methods. With respect to innovations. it would also follow that capital-saving and labor-using innovations should be favored as against laborsaving and capital-using innovations.

But it is possible that. as between a technique involving less capital but large labor-employment and another involving a large capital and relatively small lab our-employment. there may be such a large differential in productivity in relation to costs that it will be profitable to adopt the capital-intensive technique. despite the high cost of borrowing and amortization. Again. to strengthen its balance of payments, the country may have to direct some of the new investments into export production. If the export industries are capital-intensive. such as mining and mineral refining. then. even though there is a surplus of labor. investment may havoc to be directed to these capital intensive industries for the sake of earning the necessary foreign exchange.