Firms in poor countries noted that when they raised wages. the local workers often worked fewer hours. When the wage was doubled. instead of continuing to work (i days a week, the workers might work 3 days and go fishing for the other 3 days.

The same has been observed in high-income countries. As improved technology raises real wages, people feel that they want to take part of their higher earnings in the form of more leisure and early retirement. Chapter 5 described income and substitution effects, which explain why a supply curve might bend backward.

Figure 8-10 shows what a supply curve for labor might look like. At first the labor supplied rises as higher wages coax out more labor. But beyond point T, higher wages lead people to work fewer hours and to take more leisure. An increase in demand raises the price of labor, as was stated in the demand rule at the beginning of this section. But note why we were cautious to add “for most commodities” to demand rule (b), for now the increase in demand decreases the quantity of labor plied.

Verification of backward-bending supply can be found in many areas. One of the most interesting examples came when oil-rich countries curbed ‘their production of oil after the price of oil quadrupled in the early 197 0s. 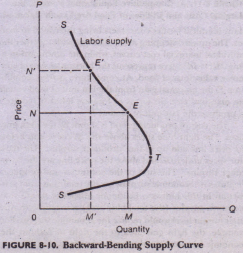 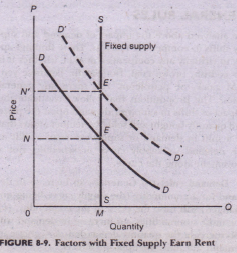