Haying laid the groundwork with our study of elasticities,we now show how these tools can assist our understanding of many of the basic economic trends and policy issues. We begin with one of the major transformations since the Industrial Revolution, the decline of agriculture. Next, we examine the implications of taxes on an industry, using the example of a gasoline tax. We then analyze the consequences of various types of government intervention in markets .

THE ECONOMICS OF AGRICULTURE

Our first application of supply-and-demand analysis comes from agriculture. The first part of this section lays out some of the economic fundamentals of the farm sector. Then we will use the theory of supply and demand to study the effects of government intervention in agricultural markets.

Farming was once our largest single industry. A hundred years ago, half the American population lived and worked on farms, but that number has declined

to less than g percent of the work force today. At the same time. prices for fanny products have fallen relative to incomes and other prices in the economy. Figure 4-7 shows the steady decline of farm prices over the last half-century. While median family income has more than doubled. farm. incomes have . stagnated. Farm-state senators fret about the decline of the family farm.

A single diagram can explain the cause of the sagging trend in fanny prices better than libraries of books and editorials. Figure 4-8 shows an initial equilibrium with high prices at point E.’ Observe what happens to agriculture as the yearn go by. Demand . for food increases slowly because most foods are necessities he demand shift is consequently modest in comparison to growing average incomes.

What about supply? Although many people mistakenly think that fanning is a backward business, statistical studies show that productivity (output per unit of input) has grown more rapidly in agriculture than in most other industries. Important advances include mechanization’ through tract-on combines. and cotton picked fertilization and irrigation; selective breeding; and development ,of genetically mod-if crops. All these innovations have vastly in Ha productivity of agricultural inputs. Rapid 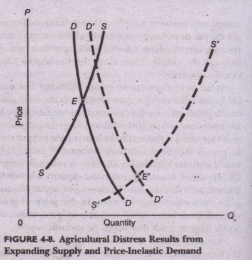 Equilibrium at E represents conditions in the farm sect decades ago. Demand for farm products tends to grow more slowly than the impressive increase in supply generated by technological progress. Hence competitive prices tend to fall. Moreover. with price-inelastic demand. farm incomes decline with increases in supply.productivity growth has ‘increased supply greedy, as shown by the ‘supply curve’s shift from SS to S S in Figure 4-8.

What must happen at the new competitive equilibrium?Sharp increases in supply outpaced modest increases in demand, producing a downward trend in farm prices relative to other prices in the economy. And this is precisely what has happened in recent decades. as is seen in Figure 4-7.

In response to falling incomes, farmers have often. lobbied the federal government for economic assistance. Over the years. governments at home and abroad have taken many steps to help farmers. They have raised prices through price supports; they have curbed imports through tariffs and quotas; and they sometimes simply sent checks to farmers who agreed not to produce on their land.

The paradox of the bumper harvest has an interesting application here. Man to help farmers by reducing their production. How could this be in the interests of farmers? Figure 4-9 shows the economics of this policy. If the Department of Agriculture requires every farmer to reduce the amount of production. the effects a shifting of the . supply curve up and to the left. Because food demands are inelastic. crop restrictions not only raise the price of crops but also tend to raise farmers’ tottal revenues and earnings. Just as bumper harvests . hurt farmers. crop restrictions tend to raise farm incomes. Of course. consumers are hurt by the crop . restrictions and higher prices-just as they would be if a flood or drought created a scarcity of food.

Production restrictions are typical of government market interference that raise the incomes of one group at the expense of others. We will see in later chapters that this kind of policy is inefficient: the gain to farmers is actually less than the harm to consumers.

tax on 1 M real income’.s of producers or rollovers. Just because businesses write a check for the taxes does not mean that the taxes in fact reduce their profits. By using supply and demand, we can analyze who actually bears the burden. or what the incidence is, of the tax.

Figure 4-10 provides the answer. It shows the original pretax equilibrium at E, the intersection of  the ‘original SS and DD curves, at a gasoline price of $I,a gallon and total consumption of 100 billion gallons per year. We portray the imposition of a $1 tax in the retail market for gasoline as an upward shift of the supply curve, with the demand curve remaining unchanged. The demand curve does not shift because the quantity demanded at each retail price is unchanged after the gasoline-tax increase. 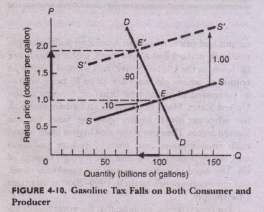 What is the incidence of a tax? A SI tax on gasoline shifts’ the supply curve up $1 everywhere. giving a new supply curve, S’ S’. parallel 10′ the original supply curve, S5. This new supply curve intersects DD at the new equilibrium, E’. where price to consumers has risen cents and producers’ price has fallen 10 cents. The blue arrows show change, in And Q. Note that consumers bear most of the burden of the tax.

Note that the demand curve for gasoline is relatively inelastic. ”

By contrast. the supply curve definitely does shift upward by $1. The reason is that producers are willing to sell a given quantity (say, 100 billion gallons) only if they recess e the same net price as before. That is. at each quantity supplied. the market price must rise by exactly the amount of the tax. If producers had originally been willing to sell 80 billion gallons at $0.90 per gallon, they would still be willing to sell the same amount at a retail price of 51.90 (which, after subtracting the tax, yields the producers the same $0.90 per gallon).

Who ultimately pays the tax? What is its incidence? Clearly the oil industry pays a small fraction. for it receives only 90 cents (S1.90 less the SI tax) rather than S1. But the consumer bears most of the burden, with the retail price rising 90 cents. because supply is relatively price-elastic whereas demand is relatively price-inelastic.

If taxes are used to discourage consumption of a commodity, subsidies an’ used to encourage production. One pervasive example of subsidies comes in agriculture. You can examine the impact of a subsidy in a maker by shifting down the supply curve. The general rules for subsidies are exactly parallel to those for taxes.

Gasoline is-just a single example of how to analyze tax shifting. Using this apparatus, we can understand how cigarette taxes affect both the prices and the consumption of cigarettes; how taxes or tariffs on imports affect foreign trade; and how property taxes, social security taxes, and corporate-profit taxes affect land prices, wage, and interest rates.

The key issue in determining the incidence of a tax is the relative elasticities of supply and demand.

The incidence of a tax denotes the impact of the on the incomes of producers and consumers. In flagella, the incidence depends upon the relative elasticities of demand and supply. A tax is shifted forward 10 consumers if the demand is inelastic relative to supply: a lax is shifted backward to producers if supply is relatively more inelastic than demand.