The concept of consumer surplus is useful in helping evaluate many government decisions. For example, how can the government decide on the value of building a new highway or of preserving a recreation site? Suppose a new highway has been proposed. Being
free to all, it will bring in no revenue. The value to users will be found in time saved or in safer trips and can be measured by the individual consumer surplus. To avoid difficult issues of interpersonal utility comparisons, we assume that there are 10,000 users, all identical in every respect. 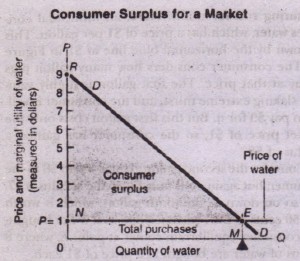 FlGURE 5-7. Total C<>consumer Swpl_ls the Area Under the Demand Curve uul Above the Price Line The demand curve measures the amount consumers would pay for each unit consumed, Thus the total area under the demand curve (OR1:’M)’ shows the total utilit), attached to the consumption of water, 8y, subtracting the market cost of water to consumers (equal to ONEA!). we obtain the consumer surplus from water consumption as the gray triangle NEll. Tlus l1e\lcl’ is useful Cor measuring the benefits
of public goods and, the losses from monopolies and import tariffs.

By careful experimentation, we determine that each individual’s consumer surplus is $350 for the highway. The hilthwar will raise consumer economic welfare if its total cost is less than $3.5 million (10,000 X $350). Economists use consumer surplus when they are performing a ro,d.bmt![U annlyiis, which attempts to determine the costs and benefits of a government program. Generally. an economist would recommend that a free road should be built if its total consumer surplus exceeds its costs. Similar analyses have been ltsed for envn onrnental questionssuch as whether :0 p I’~f”r\’t· \,jlr:ll-rness areas for rccrearion or wherhe to rer ,i,'” new pollution-abatement ~1ui!lment.

The concept of cousuroer surplus also points to the enormo I~ privilege L’~J’ ‘i’PO by citizen of modern societies. Each of us enjoys a vast array of enormouslv valuable goods that can be bought at low prices. This is a humbling thought. lf~ 0’1 know someone who is bragging about his economic productivity, or explaining how high her real wages are. suggest a moment’ of reflection. If such peoplew ere transported with their specialized skills to an t ninhabited desert island, how much would their wages buy? Indeed, without capital machinery, without the cooperation of others. and without the technolcal knowledge which each generation inherits hop. the past; how much could ani of us produce? It is only too clear that all of us real the benefits or an economic world we never made. As the great British sociologist L. T. Hobhouse said:
The organizer of industry who thinks that he has “made” himself and his business has found a whole social system-ready to his hand in skilled workers, machinery, a market. peace and order-a vast apparatus and a pervasive atmosphere. the joint creation
of millions of men and scores of generations. Take away the whole social factor and we [are) but S3\’ages living on roots. berries. and vermin.

Now that we have surveyed the essentials of demand, we move on to costs and supply.